SINGAPORE - Parkway Parade shopping mall is closed for a day due to a fire on Sunday (May 15) night.

Employees working in the Marine Parade mall told The Straits Times on Monday (May 16) that the fire broke out in a retail store on the second floor.

The Singapore Civil Defence Force (SCDF) said it was alerted to the fire close to midnight. 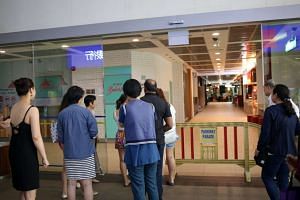 Upon arrival, SCDF officers located the blaze in a store room, conducted forced entry and put out the flames with a water jet. There were no reported injuries and no evacuation was conducted.

A burnt smell lingered in the air when The Straits Times visited the mall around noon on Monday. Workers in safety helmets were seen coming out of the building.

Staff at the entrance told members of the public that the mall was closed for the day, and would reopen on Tuesday morning during regular business hours.

Said Ms Jenny Khoo, general manager of Parkway Parade: "The cause (of fire) is under investigation. The mall will be closed today (May 16) as we clean up and check the site."

Over 50 people were seen outside an entrance to the mall. Some said they had been waiting for hours for more information.

One of them, retail staff Madam Jenny Ong, 52, said she arrived at the mall at 10am and was told about the fire and that the mall should reopen at noon.

She and two other retail assistants who also work on the second floor of the mall then went across the road for breakfast, but only to learn that the mall would be closed for the day when they returned two hours later.

"I was worried that it was my shop, which is a children's clothing shop and is also on the second level. I have no idea if our shop was affected," she said.

Said Madam Margaret Chia, 68, a part-time retail assistant at one of the stores: "We received a call in the morning telling us not to come, but we came anyway to see the situation.

"We are worried; we heard that the store has been drenched," she said.

A 40-year-old housewife, who declined to be named, said that the mall was dark and the stores were closed when she arrived in the morning to buy groceries.

"People had been waiting for hours. They should tell us if it's not going to open (by noon)," she said.