A married couple died in a car crash near Tangkak in Johor last Friday while driving back home to Singapore with their two young children at the start of the long weekend.

Mr Chua Keh Loing, a 41-year-old Singapore permanent resident, was behind the wheel when he lost control of his white car.

It collided head-on with a sport utility vehicle (SUV) near Tangkak in the direction of Bekoh at about 2.15pm. Photos of the aftermath of the accident show the car, with its front mangled, at the side of the road.

According to Malaysian media reports, Mr Chua died from his injuries at the scene, while his 43-year-old wife suffered serious injuries.

The couple's eight-year-old son and six-year-old daughter are being treated for their injuries at the same hospital, the report said.

The SUV driver and his three passengers were also hurt in the accident.

Mrs Chua's sister told Sin Chew Daily News at the hospital last Friday night that her young niece and nephew have been asking for their parents. 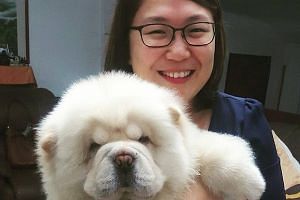 She said that her family has not told them about their parents' deaths as they are worried that the children may not be able to cope with the news.

Chinese-language newspaper Lianhe Wanbao reported yesterday that Mr Chua worked as a clerk in Singapore, and lived with his family in Woodlands.

The family of four were returning to Singapore last Friday after visiting relatives in Rompin.

Neighbours told Wanbao that the family made about three trips a year to Malaysia and would usually take the train.

A 59-year-old housewife, who wanted to be known only as Ms Lin, said it was possibly the family's first time driving to their relatives' home in Malaysia.

They had borrowed a car belonging to Mrs Chua's brother for the trip, which coincided with the June school holidays and the start of the long Hari Raya Puasa weekend, she said.

The couple's wake will be held in Seremban.