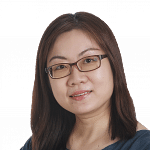 Of the 16 schools offering the integrated programme that took part in the Secondary 1 posting process, only two saw a fluctuation by one achievement level compared with indicative figures.

The indicative points were generated based on the 2020 cohort's PSLE results and school choice patterns.

Temasek Junior College had a cut-off point of eight for the 2022 Secondary 1 intake, compared with the Ministry of Education's (MOE) indicative figure of nine.

Methodist Girls' School had a cut-off point of seven compared with the indicative number of six.

The cut-off points for schools that offer the integrated programmes ranged from six to nine.

Popular schools such as Nan Hua High and Tanjong Katong Secondary saw no variation in their cut-off points.

MOE in December said as a whole, schools' cut-off points - or the PSLE score of the last student posted - were "largely stable" compared with the indicative figures released earlier.

Raffles Institution principal Frederick Yeo said the school took in 400 pupils from 119 primary schools in 2022 - not much different from previous years, when it was about 118 to 120 primary schools.

The intake for Anglo-Chinese School (Independent) was drawn from more than 70 primary schools, while Tanjong Katong Secondary enrolled pupils from about 80 primary schools, both comparable with previous years.

More information and tips about secondary school selection and posting patterns will be shared at a post-PSLE webinar on Nov 12 at 10am.

The event is organised by The Straits Times for subscribers.

At the forum, Mrs Tan Chen Kee, who is MOE deputy director-general of education (schools) and director of schools, will talk about school postings under the new system as well as how schools will carry out full subject-based banding (SBB) - which will be implemented in about 90 schools by 2023.

More On This Topic
Final prep for PSLE: Expert tips on how to support your child before exam starts on Thursday
PSLE is coming, and I refuse to take no-pay leave to coach my child

Topics that will be covered at the webinar include who is suitable for the integrated programme, what full SBB is all about, and what to look out for when picking a secondary school.

Parents can also choose to attend one of three breakout sessions helmed by six secondary school principals, where they will get to ask questions.

Temasek Secondary principal Leah Aw is looking forward to telling parents about her school's experience as a pilot school for full SBB since 2020.

She said: "We nurture our students to embrace diversity. This diverse environment helps our students to build a cohesive national identity, grow more holistically and be better prepared to lead and thrive in future."

More On This Topic
Minor Issues: Picking not the best school, but one that's best suited for my daughter
Why secondary school choice is important under new PSLE scoring system

She will also speak about adjusting to secondary school life.

For example, Ms Aw said a common misconception that parents have is that they can be less involved in the child's education at this level.

She said: "While it is certainly true that as children enter adolescence, they will need and want more independence, but they still need to feel supported by the parents, especially as they navigate a new school with new friends, subjects and activities."

She encourages parents to continue to be actively involved.

"In this way, they will know and understand better what their child is experiencing, and will have more topics of conversation with their child as well," she said.

Registration is free for all ST subscribers.

The deadline is Nov 9.

More On This Topic
Practise catching own errors: What parents can do to help kids prep for PSLE starting in August
Why school exams exist and what we can do about them