Singaporeans will get a good indication of who is most likely to succeed Prime Minister Lee Hsien Loong as People's Action Party (PAP) leader and the country's next prime minister on Friday (Nov 23).

The party's top decision-making body met on Wednesday night to finalise its choice, sources said. The central executive committee (CEC) also firmed up the rest of its slate of new office-holders.

The Straits Times understands that the PAP will announce its line-up to the public on Friday. The party will also hold separate meetings with its MPs and branch secretaries on the same day to inform them about the CEC's decision.

PM Lee, the PAP secretary-general, is unlikely to attend the media conference, as he intends for the focus to be on the fourth-generation leadership, sources said. The 66-year-old has said he intends to hand over the premiership by the time he turns 70, which is in 2022.

But before that, PM Lee has said his successor must play a key role in leading the PAP into the next general election, which cadres say can take place as early as next year but must be held by April 2021.

The choice for first assistant secretary-general appears to have narrowed down to two contenders: Finance Minister Heng Swee Keat, 57, and Trade and Industry Minister Chan Chun Sing, 49. The duo were among those the cadres voted into the CEC two weeks ago, in a milestone party conference that saw five senior members opt out of being in the party's top brass.

Mr Heng and Mr Chan were among those the cadres voted into the CEC two weeks ago, in a milestone party conference that saw five senior members opt out of being in the party's top brass.

The five included Deputy Prime Ministers Teo Chee Hean and Tharman Shanmugaratnam, the PAP's first and second assistant secretaries-general, respectively. Their stepping down paves the way for Mr Heng and Mr Chan to assume these positions in the party leadership.

Mr Heng and Mr Chan were also among seven names the outgoing CEC listed as being its top choices for the party's highest committee. 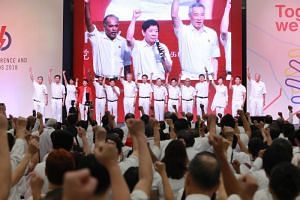 PAP 4.0: A guide to the politics of transition

Next PM must bring together the team, says Chan Chun Sing

Other "third-generation" leaders will still play a key role in the PAP's next phase, with some observers saying Home Affairs and Law Minister K. Shanmugam, 59, could be appointed party chairman, given his strong ideological beliefs and ability to rally the party's rank and file.

But the seven other 4G leaders in the current 14-member CEC are expected to play an increasingly prominent part in decision-making for the party and country in the months to come, alongside Mr Heng and Mr Chan.

Besides unveiling its new slate of office-holders, the PAP is also expected to announce the additional members who have been co-opted into its CEC.