SINGAPORE (THE NEW PAPER) - When his wife's screams woke him up at 6.45am, he found a slithery intruder in their Housing Board maisonette in Eunos.

What ensued was a two-hour drama where the family had to deal with a 3m reticulated python in their home on the ground floor while waiting for help to arrive.

Recalling the incident, which happened on Dec 30, the resident, who wanted to be known only as Mr Goh, said his wife had run into their bedroom to wake him.

"She said there was a huge snake in the toilet. I thought she was exaggerating or had mistaken something else for a snake," he told The New Paper.

But when he went to check, he saw the python coiled around a beam in the toilet.

Mr Goh, 60, said: "I was speechless. I thought, 'How did this terrifying thing get into my home?'"

By then, his daughter and son-in-law were also awake and calling the Agri-Food and Veterinary Authority of Singapore (AVA) for help.

He was stunned when he was told he had to call a pest control company to handle the matter.

"My whole family was panicking and at a loss as to what to do. My wife was running around our home, and we were frightened the snake would enter our hall."

Meanwhile, AVA told his daughter it would send help.

The family tried finding a pest control company as the python moved and coiled itself around a sewage pipe.

Mr Goh said: "It was so chaotic. Many of the pest control companies did not pick up, and some said they could not handle a python. We were really at our wits' end."

Eventually, his daughter got to a company that agreed to help. But when its employee turned up, he said the snake was too big and he had to call for reinforcements.

The team arrived at 8am and took about 30 minutes to capture the python, which was later released in a forested area. 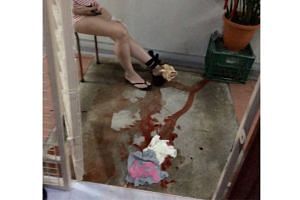 When contacted, the pest control company told TNP the snake was 3m-long and at least 10cm in diameter.

Its spokesman said the family was ushered out of their home as it was a dangerous operation.

Mr Goh, who paid $400 to get rid of the python, said: "We felt really helpless. The snake could have bitten us. Our lives could have been at stake while we were given the runaround.

"If this were to happen again, we hope we can be pointed in the right direction, or maybe someone could have come to be with us until the relevant help arrives."

She said AVA is the right authority to call for matters relating to animal nuisance.

The spokesman acknowledged that its EMSU customer service agent "could have done better by providing more information to better assist the resident in that situation".

"We are working with the service provider to improve this process," she added.

An AVA spokesman said it had promptly responded to the sighting of the snake, and was on the way to Mr Goh's home when his daughter called to say the snake had been caught.

Acres deputy chief executive Kalai Vanan told TNP that home owners should avoid calling pest control firms as there had been cases of wild animals, such as snakes, being killed or hurt due to improper handling.

"Getting pest control companies to handle them sends a wrong signal that these animals are pests... Snakes are wild animals protected by law," he added.