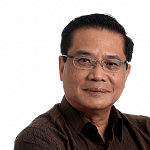 Mr Ong, 70, will be showing paintings of the Oxley Road house during his two-week-long solo exhibition at a local gallery starting next Sunday, just three days ahead of the late Mr Lee's first death anniversary.

Mr Ong, a Cultural Medallion recipient who was commissioned by Mr Lee's younger son, Hsien Yang, to do one of the paintings, said he completed the work last September.

It shows the modestly-furnished pre-war bungalow at 38, Oxley Road in its original condition back in the early 1950s.

He has borrowed it from the family for show at artcommune gallery in Bras Basah Complex, which also features another work of the house he did recently, and 30 other paintings he painted of scenes in Italy, Nepal, China, and Bali, as well as some old Singapore ones.

On his paintings of the old house, Mr Ong said he included them for the show, titled Exotic Sunlight, because they fitted its theme.

"I painted the house in morning sun and since it was where Mr Lee had lived for more than half a century till he passed away a year ago, I'd like to share the work with other Singaporeans as well."

He felt privileged to be given the task to paint the house, which he took two weeks to accomplish.

He said he is very grateful to Mr Lee's younger son for allowing him to show the painting, with the condition that a quote from the last will of his father be attached to it throughout the duration of the exhibition.

It reads: "It is my wish, and the wish of my late wife Kwa Geok Choo, that our house at 38, Oxley Road, Singapore 238629 be demolished immediately after my death or, if my daughter, Wei Ling, would prefer to continue living in the original house, immediately after she moves out of the House."

Mr Ong said Mr Lee Hsien Yang has also agreed to open his exhibition as the guest of honour.

The fate of the house has not been decided by the Government yet.

It was in the news after Mr Lee's death when his daughter, Wei Ling and younger son, Hsien Yang issued a statement as executors of their father's last will in which they outlined their father's wishes.

His eldest son, Prime Minister Lee Hsien Loong also told Parliament last April that a decision on the fate of the house was not required yet as his sister would continue to live there.

There was some debate last year on whether the house should be preserved for its historical value or demolished according to the late Mr Lee's wishes.

But a survey by market research firm YouGov last year found that 77 per cent of the 1,000 people polled wanted the house torn down.

On the eventual fate of the house, Mr Ong said: "I am happy I painted it because if it were to be demolished in the end, at least I can say I painted it when it was still around."

A version of this article appeared in the print edition of The Sunday Times on March 13, 2016, with the headline Paintings of late Mr Lee Kuan Yew's Oxley Road house in art show. Subscribe