SINGAPORE - The site of this year's National Day Parade, the Padang, as well as the Cavenagh, Anderson and Elgin Bridges in the vicinity, will be gazetted as national monuments.

The Padang will be the first green, open space to join the Republic's stable of national monuments.

Likewise, this will be the first time that the National Heritage Board's (NHB) Preservation of Sites and Monuments (PSM) division is adding bridges to its list.

The gazetting of the two new monuments - the bridges will be protected as an ensemble - will bring the total number of national monuments in Singapore to 74. The move is part of the authorities' commemorative efforts for the Singapore Bicentennial.

It was announced by Deputy Prime Minister Heng Swee Keat  on Saturday (Aug 3).

The Padang is chock-full of history.

Some evidence suggests that it was where negotiations between the British, Temenggong Abdul Rahman and Sultan Hussein Shah of Johor took place in the lead up to the 1819 treaty which allowed the British East India Company to set up a trading post here.

Noting that the Padang is a very special location, DPM Heng said the site has witnessed many historic events.

In 1959, when Singapore became self-independent, the first Yang di Pertuan Negara, who went on to become the first President of the Republic, Yusof Ishak, was inaugurated at the Padang.

It was also where the national coat of arms was launched, and, in 1966, the first National Day Parade was held there.

“So these are important events that mark our progress as a nation, and we are going to designate it as a national monument,” said DPM Heng.

The Padang has also borne witness to key events throughout Singapore's history, notes NHB. For instance, it hosted the victory parade celebrating the formal surrender of the Japanese in Singapore in 1945; the swearing-in of Yusof Ishak as head-of-state in December 1959; and the announcement of the merger with Malaysia in September 1963.

Ms Jean Wee, the director of NHB's PSM division, said the Padang has been a gathering point for the people of Singapore since the 1800s.

During the colonial period, Chinese New Year, royal birthdays, jubilees and coronations, and occasionally Thaipusam were commemorated at the green space with displays of fireworks.

People also converged on its grounds to witness key historical milestones such as the victory parade on September 12, 1945 which celebrated the formal surrender of the Japanese in Singapore at the end of the Second World War.

A national monument gazette is the highest form of recognition for a structure or site's significance. Evaluation factors include its historical, architectural and social importance to Singapore's built heritage.

With the gazette, NHB noted that the character and appearance of the Padang, as a key green area and open space within the city, will be preserved for future generations.

Approximately 4.3ha, the Padang, which is state land, is about the size of five football fields.

NHB added that both gazettes will not change the current use of the site and structures.

NHB said the trio of bridges were gazetted as they are the most architecturally significant of the 14 bridges that span the Singapore River. 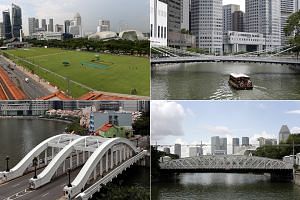 What's so special about the Padang, Cavenagh Bridge, Anderson Bridge and Elgin Bridge?

History lessons in Singapore: Some heritage trails for you to explore

DPM Heng further noted that the bridges reflect Singapore’s growth as a flourishing city as well as a trading port.

“They speak about our link to the rest of the world”, he said.

Located at the historic mouth of the Singapore River, the bridges symbolically connected Singapore with the world as they facilitated trade and transport links that were essential for the growth of the island in the 19th century, it said.

Additionally, the bridges eliminated the need for boatmen to ferry passengers across the river as they helped link the south bank with the north. This was critical in connecting the mercantile and commercial side with government offices located on the north bank of the river, it added.

Furthermore, they collectively highlight the relationship of trade and collaboration between Great Britain and her colonies, having been each manufactured in Britain before being shipped to Singapore.

DPM Heng said that the country gives special protection to its national monuments so that Singaporeans can get to learn more about the the significance of the island’s history, culture and heritage.