She brought up the issue when referring to the charges by Mr Lee Hsien Yang and Dr Lee Wei Ling that organs of the state have been used against them by their brother, Prime Minister Lee Hsien Loong.

The two younger siblings have said that state organs were being used to drive the personal agenda of PM Lee, and to make the point, they cited a ministerial committee that was set up to study options for the house at 38, Oxley Road.

They also alluded to wrongdoing in the appointment of Mr Wong as A-G in January this year, implying he got the role because he served as PM Lee's personal lawyer.

Ms Lim, who has in the past raised questions about the appointment of Mr Wong and Mr Nair, said Mr Wong had not just worked with Law Minister K. Shanmugam in the same law firm, he had also advised PM Lee specifically on matters relating to the Lee estate as his personal lawyer.

She added that Mr Nair had recently resigned from the People's Action Party after stepping down as an MP, before he was appointed Deputy A-G.

"Now there is no legal prohibition on appointing the Government's close friends and former party comrades as the A-G or Deputy A-G," she said. "But from a system point of view, do these appointments instill public confidence that the Attorney-General's Chambers (AGC) will act independently in matters where the Government, or worse the PM, has an interest in the outcomes?" 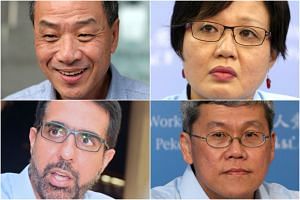 She also asked: "At the time when the appointments were being considered, were there no other qualified persons to take up those posts? What about the many career legal service officers who had dedicated their lives to public service? Was there no one there good enough?"

Given this conflict of interest, she said, she wondered whether the AGC would act independently in matters on the house, in which the Government and Prime Minister were involved.

"I'm concerned about conflicts of interest. How would the AGC act on advising the Government on any decisions to take on Oxley Road?" she asked. "Are they already giving advice? Who is giving advice?"

Ms Lim asked if Mr Wong and Mr Nair would recuse themselves from matters concerning the house.

Specifically addressing Mr Nair's role, she said: "Will he recuse himself too as his former party leader, secretary-general Lee Hsien Loong, is involved?"

Ms Lim also focused on the power of the A-G, saying it is a more powerful state actor than judges, who are constrained by laws passed in Parliament.

"By contrast, the A-G as public prosecutor has almost absolute prosecutorial discretion," she said, noting how the A-G has the discretion to charge people and can let people off without warning or reduce charges.

"It's not an exaggeration to say that all of us are at the mercy of the A-G. But each of us should be fairly treated by him, since under the Constitution all of us are equal under the law and entitled to equal protection."

She added that the integrity of organs of state should "be of concern to every Singaporean who wishes to see Singapore as a bastion that upholds the rule of law".

"We must protect the organs of state as professional bodies with a national mission. The Government should never seek to interfere with or to influence those organs of state set up to ensure good governance," she said.