SINGAPORE - More than 5,000 Raffles Girls' School (RGS) alumni, ranging from recent graduates to those who had attended the school in the 1940s, headed back to their alma mater for one last hurrah on Saturday (Aug 17).

It was the last homecoming event at the Anderson Road campus ahead of the school's move to Braddell Road this October.

The school is also celebrating 140 years since it was officially established in 1879 with an enrolment of 77 students.

Mrs Betty Chen, 92, from the Class of 1941, was one of those who took a walk down memory lane on Saturday.

The patron and former president of the Chinese Women's Association remembered her days as an RGS girl fondly, and chuckled at how she enrolled in the school.

Her mother brought her to the school, then at Queens Street, but principal Dorothy Buckle told them there was no vacancy.

"My mother looked into one of the classrooms, saw an empty chair and asked if it was occupied," she said.

"When the teacher said it wasn't, she told me to sit there, and that's how I joined," Mrs Chen added.

More importantly, it was the friendships she forged during her schooldays that she has kept close to her heart. 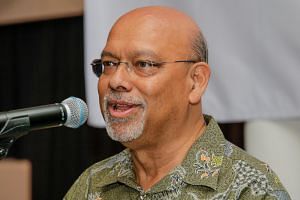 St Patrick's School class of 1969 reunite to thank their teachers

A 'family get-together' to celebrate 165 years of CHIJ tradition

Her batchmate Mrs Ivy Kwa, 93, also attended the event. The two have kept in contact over many decades and still meet up regularly, even as many of those from their cohort have passed on.

The former students were greeted by nostalgia, with exhibitions and activities representing various eras, including the "Rock n Roll 70s" and "Swinging 80s", organised by alumni from those years.

At the 80s booth, visitors were given small mementos in the form of the report book design of the time, and treated to kacang puteh as disco lights flashed around them.

Over at the 2000s section, Instagrammable photo opportunities were aplenty. Life-sized photo standees of the school principals from that period were also available for former students to take pictures with.

THE BIG STORY: Raffles Girls' School gets a new home | The Straits Times

A huge birthday cake in the shape of the Anderson Road campus was cut after Chan led everyone in a moving rendition of Home, as well as some school cheers.

She was one of the first few batches of students after the school renovated in 1993 to its current state.

"We started here from the beginning with this building," said the banker.