More than 270 food and beverage outlets will stop providing plastic straws from July 1, in a major step to reduce plastic waste in the local F&B sector.

The outlets, owned by 31 companies, will provide straws to customers only on request or for specific medical reasons, the World Wide Fund for Nature (WWF) said in a statement yesterday.

They include all 53 restaurants and bars in hotels under the Accor Group, such as Raffles, Fairmont and Swissotel The Stamford, as well as the 24 F&B outlets in the Singapore Zoo, Night Safari, River Safari and Jurong Bird Park.

Twenty-four PastaMania outlets, eight Nando's restaurants and 15 F&B outlets of Spa Esprit Group, including Tiong Bahru Bakery, are also among the businesses that will stop giving out straws.

The move is part of a voluntary WWF initiative called Plastic Action (Pact), where businesses commit to reduce the amount of unnecessary plastics used. Pact is supported by the National Environment Agency and Zero Waste SG.

Mr Kim Stengert, WWF Singapore's chief of strategic communication and external relations, said the move sends "a strong signal that businesses are starting to take responsibility for the plastics that they use". "We encourage more brands to join the effort," he added.

An estimated 2.2 million straws are used every day in Singapore, according to a report last year by consultancy AlphaBeta and social enterprises The Final Straw and Cyan Project.

By 2050, there could be more plastic in the ocean than fish by weight, and this could have potential implications for human health, the WWF said. It added that micro plastics have been found in the gut of one out of four fish and in tap-water samples.

Mr Kevin Bossino, vice-president of operations for AccorHotels Singapore, said people today are much more environmentally aware and quite appreciative of companies making a genuine effort to limit their environmental footprint.

"If our initiatives are explained and our customers engaged in the process, and they see that we are exploring various options, they are generally very supportive of such measures," he added. 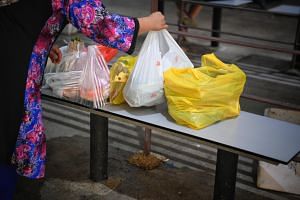 No more plastic straws to go with Yakult drinks

The move to reduce plastic straw usage here is part of a broader drive worldwide to cut down on plastics and reduce wastage.

In 2017, Kenya introduced one of the world's strictest bans on plastics. A person caught using a plastic bag can be punished with up to four years' imprisonment or a fine of US$38,000 (S$52,000).

Indian Prime Minister Narendra Modi pledged last June to ban all single-use plastics in the country by 2022, while Tanzania banned the production, importation, sale and use of plastic bags last Saturday - becoming the 34th African country to implement such restrictions.

Secondary school student Leo Choo Han Rui, 16, said he supported the move. "If you are drinking liquids like soft drinks from a can, it is okay to do so without a straw... Straws need to be used sparingly."

The WWF said that, together with Zero Waste SG, it will continue to work with the F&B industry to reduce the use of unnecessary plastics like cutlery, and come up with measures and innovations to tackle the problem.

A version of this article appeared in the print edition of The Straits Times on June 04, 2019, with the headline 'Over 270 F&B outlets won't give out plastic straws from July 1'. Subscribe
Topics:
More
Whatsapp Linkedin FB Messenger Telegram Reddit WeChat Pinterest Print Purchase Article Copy permalink