SINGAPORE - With its extensive flight links to 160 cities, cosmopolitan workforce and strategic position in Asia, Singapore has long banked on its connectivity and reputation for openness to attract investments, jobs and tourism dollars that have buttressed its economy.

But this has been tested in Covid-19 times, with flight links, for instance, down to 70 as at end-May.

While it still holds on to its standing as a premier business hub at the moment, the quicker pace of reopening in developed Western economies that have attained high vaccination rates has prompted some to question if Singapore's comparatively more cautious approach to reopening would risk eroding its competitiveness in the long run.

Already, fatigue is starting to set in as firms here grapple with the long-term impact of tight border controls and other restrictions that have severely affected Singapore's links to the rest of the world.

Foreign employees are unable to travel home as they fear not being allowed to return as a result of border controls, and this has taken a toll on their mental health. Disruptions to supply chains and business operations have also affected cash flow, leading to investments being put on pause.

In Europe, however, vaccine passports for travel within the European Union were launched on Thursday, while international and domestic flights in the United States are allowed, with some restrictions.

Offices have also started to reopen in the US and Europe, even as working from home remains the default here.

"Now that people know that their colleagues and friends in highly vaccinated countries are currently enjoying a return to pre-Covid-19 life, Singapore is starting to seem more like a gilded prison, rather than one of the best refuges from Covid-19," he tells Insight.

It would not be feasible to continue with a strategy of maintaining zero cases, says Singapore Business Federation chief executive officer Lam Yi Young, as doing so will mean having regular lockdown periods and extended periods of border closures and travel restrictions. This will impact the viability of many businesses and affect the livelihoods of Singaporeans.

"The current strategy by the Government to prepare for an endemic Covid-19 situation is an important and necessary one," he says - a view shared by all business chambers Insight spoke to.

Moving from Covid-19 pandemic to endemic: Singapore's strategy and how it can unfold

Real-world evidence shows what's next in the Covid-19 fight

The economic imperative for change

The economic imperative for shifting Singapore's Covid-19 strategy and opening up its economy has grown in recent weeks, though observers note the decision made by the multi-ministry task force on Covid-19 to do so was also based on scientific and political factors.

In a report released on Tuesday, the Economist Intelligence Unit (EIU) says as the removal of social restrictions and border controls in the US and Europe drive a recovery in the global economy, a zero-Covid-19 approach risks becoming one that will undercut rather than support economic activity.

Asian economies like Hong Kong and Singapore which have pursued such an approach will face the most pressure to adjust their strategy, as they are heavily reliant on international business and tourism, the EIU adds, noting that about 30 per cent of the Singaporean population have neither citizenship nor permanent residency status.

"The country risks permanently losing such labour if arrangements for easier cross-border travel are not put in place, and it will be difficult for the local workforce to fill the gaps created," says the EIU.

Indeed, the perception that Singapore is less welcoming of foreign business people than it was previously has grown over the last year and a half, Singapore International Chamber of Commerce chief executive Victor Mills says, even as he notes that most people living here believe Singapore is one of the best places in the world to be during the pandemic.

This is due to factors like the uncertainty of re-entry approvals for foreign residents who may need to leave Singapore for emergency purposes, such as to visit ill relatives.

Why the cautious pace

Health Minister Ong Ye Kung said on Thursday that Singapore's move towards the new normal of living with endemic Covid-19 will progress at a calibrated pace. One constraint is the extent to which people can accept the changes, he said. For instance, when the Health Ministry said on Tuesday it will no longer disclose details of each new Covid-19 case detected in the community as the country moves towards a new phase of battling the pandemic, some had questioned the move, Mr Ong noted.

Singapore Management University law don Eugene Tan says citizens have become accustomed to having a low number of Covid-19 cases in the community, unlike the endemic situation in the US, for instance. "(This) has meant that we cannot shift too dramatically in too short a time... given our generally low level of numbers in community, our sense of whether the situation is worsening or improving is on a different magnitude altogether."

And while foreign executives may look upon photos on LinkedIn of their US counterparts gathering in large groups without having to wear masks with envy, American Chamber of Commerce in Singapore (AmCham) chief executive officer Lei Hsien-Hsien has told members some caution is still advisable, as the virus remains unpredictable.

"If the virus has taught us anything, it is that you need to be prepared for the worst. You may make a business trip to the US and you enjoy the freedom over there, but all these things can turn on a dime," says Dr Lei, who is also an adjunct associate professor of epidemiology at the Saw Swee Hock School of Public Health.

Slump and recovery: The two faces of Singapore's economy

Already, concerns about the Delta variant have opened up conversations about the need to wear masks again in the US, though health officials had said in May that fully vaccinated people no longer needed them.

"The Singapore Government has made a very conscious decision that we need to be more cautious and conservative because we're on an island - we have a much more dense (population)," added Dr Lei.

According to the Bloomberg Vaccine Tracker, 58 per cent of Britain's population is fully vaccinated, while the figure is 51 per cent in the US. This figure is just under 40 per cent for Singapore, though the proportion of those who have been partially vaccinated is about 60 per cent.

Differences in the extent to which the public and politicians in different countries are willing to trade public health risk for economic and personal freedoms also remain, says Associate Professor Theseira.

The handling of the pandemic is also widely seen as a litmus test for the 4G leadership, Associate Professor Tan says.

Noting that some have, rightly or wrongly, accused them of slipping up twice over the Covid-19 outbreak - in the dorms, as well as the outbreak due to the Delta variant - there is now a smaller margin for error, which contributes to a cautious pace of reopening, he adds. "It's once bitten twice shy, mindful that more haste may mean less speed."

Singapore's consistent approach to the pandemic, its strategic position in Asia as well as its safety and quality of life remain strong draws for businesses, and firms are unlikely to uproot for now.

In fact, AmCham has seen a recent uptick in the number of firms that are interested in expanding to Singapore, Dr Lei says.

OCBC's Ms Ling says: "Asean is also benefiting from the US-China strategic rivalry that is still ongoing amid the Biden administration, with investments shifting from being China-centric to being Asean-centric."

Dr Gedeon Lim, a Singaporean economist at The University of Hong Kong, also notes that Singapore remains one of the countries - if not the only one - in South-east Asia and the Indo-Pacific region that is on track to open its borders to the rest of the world, barring another outbreak.

With further reopening on the cards, businesses here are looking forward to an easing of measures.

Dr Tim Philippi, executive director of the Singapore-German Chamber of Industry and Commerce, says that its members hope to be able to travel without quarantine, with a shorter quarantine, or be allowed to quarantine at home.

Singapore Manufacturing Federation president Douglas Foo echoes his views, saying that allowing businesses to travel with greater ease to countries that recognise vaccine certificates will allow them to hold exhibitions and business meetings and expand their market presence.

Whether these aspirations will be met bears watching.

Prof Theseira says while Singapore has further strengthened its global reputation for competent governance and societal resilience over the course of the pandemic, all of that will not matter if it does not successfully transition to this new normal.

"I don't expect international businesses and investors who have enjoyed Singapore's calmness in the storm last year to have lasting gratitude for it if we don't open up sufficiently so they can get their business back to normal." 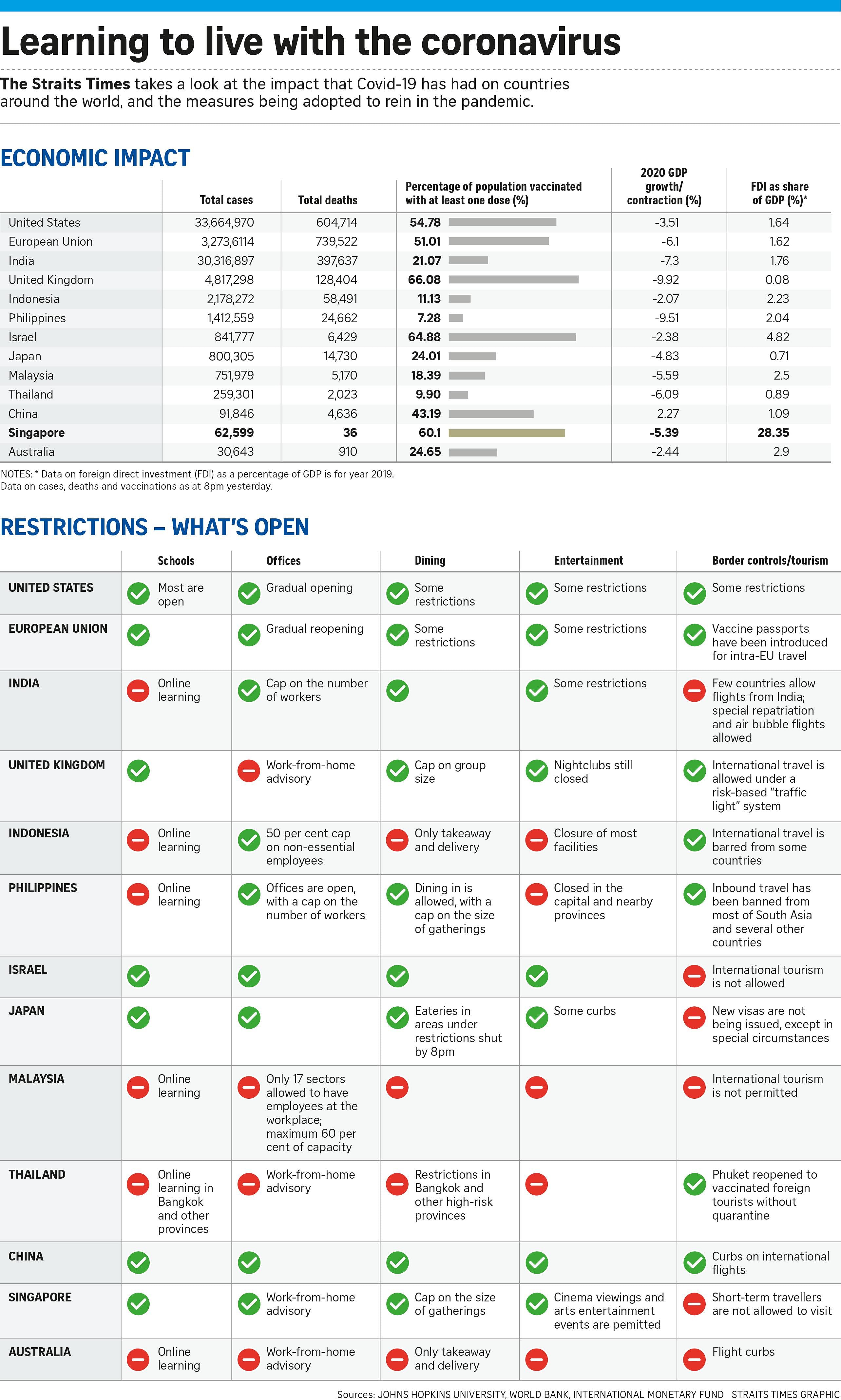