TOKYO - The opening up of North Korea's economy will greatly benefit the Asia-Pacific, Japanese Prime Minister Shinzo Abe said on Monday (June 11), as this will connect a missing link to regional economies.

"Networks are structures in which the entry of a single new participant yields significant benefits for the existing members," he told a dinner gathering of regional leaders at the 24th Future of Asia Conference, organised by Nikkei Inc.

North Korea becoming connected will "spark rapid advances in the networks connecting the economies and the peoples of countries around Asia", he said. "North Korea has untouched resources as well as an abundant labour force that is presumably hard-working."

His comments, coming on the eve of a landmark summit between North Korean leader Kim Jong Un and United States President Donald Trump in Singapore, were a marked departure from the hawkish "maximum pressure" rhetoric championed by Japan.

Mr Abe spoke to Mr Trump by phone on Monday, four days after he won reassurances from the US President that he will be taking up Japan's longstanding abduction issue at the meeting with Mr Kim.

The abduction issue refers to the North's kidnapping of Japanese citizens in the 1970s and 1980s. It is a highly emotive issue in Japan, which says 12 citizens remain unaccounted for. But North Korea asserts that the issue is fully resolved, in claiming that eight have died while the other four never entered the country.

The Japanese Prime Minister was also reassured that there would be no easing of sanctions until Pyongyang takes concrete steps towards denuclearisation.

Trump-Kim summit: Why Japan's defence strategy hangs in the balance 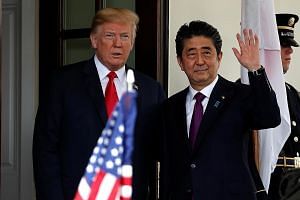 Last-ditch bid to ensure Japan's interests are on summit agenda

"There can be no doubt that the effects of North Korea taking steps down the path towards peace, the rule of law, and stability will transcend Asia and extend to the global economy as a whole," he said, vowing again to normalise ties and provide economic aid to North Korea once the abduction, nuclear and ballistic missiles issues are comprehensively resolved.

He also proposed lifting economic sanctions against Pyongyang if it proves true to its word - though he still cautioned against being prematurely optimistic.

"Just because a sparrow has flown in from the north, it doesn't mean that spring is necessarily here," said Mr Kim Dong Yeon, who is also the South's Finance Minister. "We have had some experience with North Korea in the past, and so predictability and trustability-wise there are some situations in which we need to be cautious and which we have to pay attention to."

Much more optimistic, however, was Professor Moon Chung In, a special adviser to South Korean President Moon Jae In.

He told a panel discussion at the two-day Nikkei conference, themed "The faltering world order: how will the North Korean crisis turn out?", that there are clear signs that Mr Kim Jong Un has taken a different path.

"Don't use past behaviour as the yardstick for current behaviour," he said in a heated debate with Dr Daniel Twining, president of US think-tank International Republican Institute, over whether North Korea can be trusted to denuclearise.

Dr Moon pointed to how Mr Kim Jong Un has proactively returned three US hostages, destroyed its Punggye-ri nuclear test site and missile launching pad, and had shown commitment in taking an international flight to Singapore.

This, he said, is concrete evidence of why the situation today is markedly different from the North's previous promises to denuclearise.

His rebuttal came after Dr Twining, who was part of the negotiating team under the administration of former president George W. Bush, said the U-turn in posture was unbelievable, given how Pyongyang was threatening to strike Tokyo half a year ago.

He also pointed to Pyongyang's human rights record, and the fact that it was a totalitarian, dynastic regime.

Professor Jia Qingguo of China's Peking University and Dr Akihiko Tanaka of Japan's National Graduate Institute for Policy Studies, however, were both cautiously optimistic, saying it was important to give the process a chance.

Yet they identified some potential obstacles to the process. Professor Jia said it was difficult to assess the concessions North Korea would make to denuclearise without a package of rewards, adding: "The US will probably promise that there will be no regime change, but who can trust the US after what has happened in Libya?"

Dr Tanaka, meanwhile, said Japan will be extremely careful on extending any form of economic rewards.

"When we can deliver such aid is a difficult question to answer, because the Japanese public needs to be properly persuaded that the abduction issue is completely resolved," he said. "Even if we assume good intentions on the part of Kim, the process can be quite difficult."