About time, say parents of special needs children who face resistance from drivers

The authorities recently announced that open prams will soon be allowed on buses. But even before the ban on open prams is lifted, some parents of children with disabilities have asked if they can be exempted from the rule first.

As their children cannot walk and need to remain in prams or paediatric wheelchairs, they said that they need to be allowed to board buses with open prams.

They now have to put up with a lot of stress when taking the bus as they often have to negotiate with bus drivers to allow their children on board while getting impatient stares from other commuters.

They told The Sunday Times of instances where drivers did not recognise cards that identify children as people with disabilities and mistake paediatric wheelchairs for prams, thus not allowing children in such wheelchairs to board.

"The buses have labels to show they are disabled-friendly, but the drivers are not disabled-friendly," said housewife Cindy Wong, 48. Her daughter, 13, has cerebral palsy, in which brain injury causes impairment of motor functions.

An estimated 3 per cent of the Primary 1 cohort each year have special needs, though this includes people with intellectual disabilities. Mainstream schools have an enrolment of 18,000 special needs pupils and a smaller number are in special education schools.

The Land Transport Authority (LTA) said prams on buses must be folded as open ones can "pose safety hazards to both the child and passengers if (bus) emergency brakes are applied". But a spokesman said this is being "actively reviewed" and LTA is studying different restraint systems with bus operators.

Most bus operators said they allow open prams for children with disabilities on a case-by-case basis. 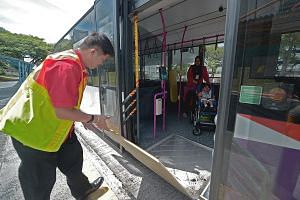 Bus rides an ordeal for mother of boy with cerebral palsy

SBS Transit, the largest bus operator, said that since late May, it has made arrangements to allow children with special needs to travel in their prams on its buses. It has been progressively briefing its 6,000 bus drivers about this.

Its senior vice-president for corporate communications Tammy Tan said the wheelchair ramp of buses will be deployed for the prams to be pushed on board. "The caregiver has to hold on to the pram and ensure that the child is securely fastened at all times," she said.

The caregiver has to produce the child's SG Enable or Developmental Disability Registry (DDR) cards too.

Tower Transit said its bus drivers do not require proof before allowing the prams on board. But prams may have to be folded during peak periods, when the buses are crowded. Go-Ahead Singapore said its bus drivers are trained to assess whether to allow open prams on buses, on a case-by-case basis. SMRT said that its bus drivers would help to fold up prams and find a seat for special needs children.

Parents told The Sunday Times that allowing their special needs children in open prams to board buses was long overdue. They said it may be dangerous to require that prams be folded.

Said cabin crew Shirley Ong, 40: "Asking a parent to handle a special needs child with a folded pram in a moving bus is more dangerous than having the child strapped safely in the stroller, with brakes applied."

Housewife Juliah Kasiman, 35, had to carry her son in a sling carrier till he was six, as bus drivers did not allow open prams on board.

She said: "If my son is in a sling carrier and I bend down to fold the pram, he'll bend forward. His head is not supported and could hit the floor. Having to carry him and the folded pram and then tap the EZ-Link cards - I'd be like an octopus." Her son is now seven years old.

"A parent showed a driver the DDR card (to prove her child has a disability), but he still insisted that she fold the pram."

Welfare groups agreed on the need for education and training.

Cerebral Palsy Alliance Singapore executive director Jessie Holmberg said: "Inclusive transport should help people with disabilities go to places without worries and negative reactions from service providers. It is vital that bus drivers go through training, from understanding the different types of disabilities to communicating with parents and children with disabilities."

While noting "great progress" in the accessibility of public transport, Disabled People's Association executive director Marissa Lee said some drivers may not be inclusive enough. "Drivers need to understand why children with disabilities, like wheelchair users, should not have to transfer out of their prams."

She said: "How can we hope to have social integration for these children when they are not able to get to the places where they can learn and play with other children?"