It is the largest amount ever won by a single person for a Toto draw in Singapore, a spokesman from Singapore Pools confirmed.

Long queues were seen at Singapore Pools outlets on Thursday as many punters wanted to try their luck at winning the rolled-over prize money, Shin Min Daily News reported.

The winning ticket was sold at Block 211, Hougang Street 21, and it was a "System 7 Entry", according to Singapore Pools' website. 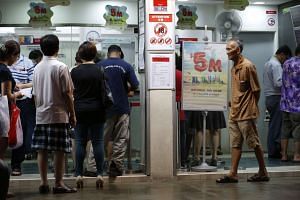 In March 2015, one person took home a Toto prize of $8 million. That has now been topped.

Since the Toto draw was updated in Oct 2014, the top five prizes awarded for the draw were between $6 million and $9.5 million.