SINGAPORE- She had no professional coach, no proper facilities and no official training routine.

Yet Madam Mary Klass stood out as one of Singapore's pioneer female athletes in the then largely male-dominated arena of competitive sport.

"Back in the 50s, women had to train very hard to get into serious sports," said Madam Klass. "Monday to Friday, I would go to the public fields or tracks near my home to train at 5.30am and at 5pm. Without fail."

Now 83, the grandmother of four will face the crowds again in the form of a short film during this year's National Day Parade at The Float @ Marina Bay.

Her journey as one of Singapore's first female Olympians will be among the five real-life stories translated into a short film to be screened during the parade come Aug 9.

The film, together with mass display performances, will showcase the Singaporean spirit through the tales of five protagonists who have pursued their hopes and aspirations.

"I was shocked when they first told me that I was picked for NDP... It is a great honour. I never expected that my story would inspire people," said Madam Klass, who was also featured in a 2017 documentary titled When The Stars Align, about Singapore's pioneer female athletes. 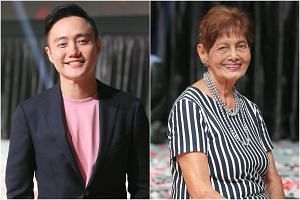 Collection of NDP tickets to be held at National Gallery Singapore on July 6 to 8, 13 to 15

The sprinter retired in 1957, but not before coming home with a silver medal in the 1954 Asian Games in Manila and being among the first group of women to represent Singapore at the 1956 Melbourne Olympics.

This was all despite reservations by her father who initially thought she was "wasting time". "I ran not just to win. I ran to prove to others that I could succeed and to better myself, and better my timing." said Madam Klass, who started training to run competitively when she was 17.

She had a word of encouragement for young athletes today, saying: "Never lose courage... What I have done, don't follow me. Do better than me."

With no guidance from professional coaches, Madam Klass started out training with former athletes and other sprinters she met at public stadiums and fields. "I ran with the boys, and that gave me a lot of stamina."

While the journey was not easy, Madam Klass said she was honoured to have been able to "stand tall" for Singapore.