SINGAPORE - A minute-long handshake between China's President Xi Jinping and Taiwan's President Ma Ying-jeou kicked off a landmark summit at the Shangri-La Hotel on Saturday (Nov 7), the first meeting between the top leaders of the two sides in 66 years.

In a historic moment, both men walked onto a carpeted area from different sides of the foyer, met in the middle, smiled broadly and posed for the cameras as hundreds of flashlights popped around them.

Although they looked at each other only momentarily, they stood close and seemed relaxed as they continued shaking hands for a full minute.

The two men then waved before entering a meeting room with other members of their delegations.

There, across a table, both men made remarks which were open to a selection of the media before they had a closed-door meeting.

Arrival of delegates in the meeting room 4

Mr Xi, who spoke first, told Mr Ma that the two sides are "one family" and cannot be pulled apart. He added that the Chinese people on the two sides of the Taiwan Strait had the ability and wisdom to solve their own problems.

"No force can pull us apart," he said in Mandarin, reading from a text.

"We are brothers who are still connected by our flesh even if our bones are broken, we are a family in which blood is thicker than water." 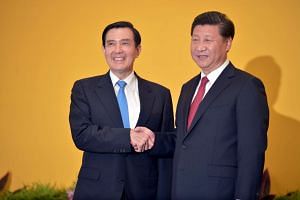 Mr Ma, also reading from a text, said he and Mr Xi were meeting today as the leaders of Taiwan and China. He noted that during the 1993 Koo-Wang talks in Singapore between the envoys of the two sides, they inked four agreements and set the foundation for institutionalising cross-strait negotiations.

Recounting a meeting he had with the late Mr Lee Kuan Yew in October 2003 at the East Asia Economic Summit, Mr Ma said they both agreed that the interest of the people should come first in the development of cross-strait ties.

The fact that he was sitting in the same room as Mr Xi today was the result of efforts by the two sides to replace confrontation with dialogue and reconciliation, he noted.

“We crossed 66 years of space and time to stretch out our hands and shake them together, holding in our hands the past and future of both sides of the (Taiwan) strait,” he said.

* Work together for the sake of the people

Mr Xi, accompanied by his wife Peng Liyuan, is on a two-day state visit to Singapore, his first as president. He arrived on Friday evening to a ceremonial welcome and a state banquet.

On Saturday, he opened the China Cultural Centre in the morning before delivering a Singapore Lecture at the National University of Singapore. He told the audience that there will never be a problem with freedom of maritime navigation or overland flights in the South China Sea.

He said that the "starting point and ultimate purpose" of China's policy in the South China Sea is the maintenance of peace and stability, adding that a stable environment for development is the "common interest of all Asian countries".

A timeline of Taiwan-China relations since 1949

Leaders from Singapore and China also exchanged letters to officially launch negotiations to upgrade their bilateral free trade agreement. This sets the two countries on the path to broadening the pact, first inked in 2008, to cover more sophisticated economic areas like trade in services.

Other agreements were also inked, including kickstarting their third government-to-government project in Chongqing in China's western region.

The China-Taiwan meeting comes a few months before Mr Ma leaves office. Taiwan will hold a presidential election in January. His Beijing-friendly Kuomintang, or Nationalist party, has caused unease with voters by bringing the two sides closer economically, and its presidential candidate is trailing in opinion polls.