SINGAPORE - Two people died and three were injured in a traffic accident involving a trailer, lorry and three motorcycles at the Causeway on Saturday (June 30).

The Singapore Civil Defence Force (SCDF) said it received a call for an ambulance at 1am from Woodlands Causeway Bridge.

It dispatched three ambulances and one fire engine to the scene.

The 42-year-old motorcyclist was unconscious when he was sent to the hospital, and subsequently died from his injuries, added the spokesman.

According to the SCDF, a fourth man received minor abrasions and did not want to be taken to the hospital.

The Straits Times understands that all the men involved are Malaysians, apart from the 42-year-old motorcyclist, who is a Singapore permanent resident.

The accident caused departure lanes at Woodlands checkpoint to be closed temporarily.

A Facebook post by Immigration and Checkpoints Authority (ICA) at 2.30am advised travellers to use Tuas checkpoint.

In an update at 4.55am, it said that two out of three departure lanes had reopened.

It advised travellers to check One Motoring website before embarking on their journey.

[30 June, 8.00am] All Departure lanes at the Causeway have re-opened and operations at Woodlands checkpoint have resumed normalcy. We would like to thank travellers for their cooperation.

Massive jam at Woodlands Checkpoint. All buses diverted! Had to walk from Woodlands Train Checkpoint to bus stop opp former Woodlands Town Garden (now Marsiling Park) to ride bus service 178 that is enroute to Boon Lay. Thanks to the driver for helping me! @LTAsg @SMRT_Singapore 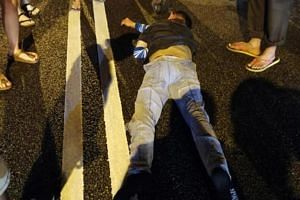 2 motorcyclists injured after accident along BKE towards Woodlands Checkpoint

At 8am, some seven hours after SCDF received a call about the accident, ICA said that all departure gates had opened and normal operations at Woodlands checkpoint had resumed.

Photos and videos of the accident posted on social media showed a lorry crashing across the road divider and into traffic travelling in the opposite direction. Visuals of the aftermath of the accident also showed a string of motorcycles strewn along the road, with a motorcycle underneath a lorry.