SINGAPORE - After about 10 years sleeping on the streets after his divorce, Mr Swee Peng Chye, 63, finally has a roof over his head to call his own.

A divorcee with five children, he moved into a rental flat in Jurong East at the start of October, sharing the small space with another elderly man.

Before that, he spent about five months at a shelter in Ang Mo Kio after much persuasion from social workers who had first found him sleeping on a bridge in Chinatown.

The social service office at Kreta Ayer eventually helped him find lodging, where he and his flatmate pay $99 a month for rent.

He is also currently on government financial aid, receiving $350 a month from the short-to-medium-term assistance scheme given out by the Community Care Endowment Fund (ComCare).

"It's really enough for my rent and bills, and I am very thankful," said Mr Swee in Mandarin.

But he still needs some help while he is unable to work to cover daily expenses such as transport and food, and he hopes to have some savings, he added.

While four of his five children are in contact with him, only one gives him money, about $30 several times a month, said Mr Swee, who added that the ties with his children are strained after a complicated divorce.

"I don't want to keep asking, or he will say I treat him like an ATM," he added. 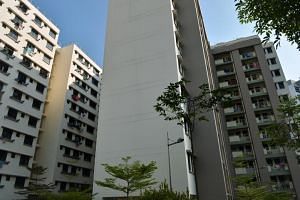 In 2017, while he was on the streets, he felt a sharp pain in his chest, and called an ambulance.

He later underwent surgery for his heart, as doctors told him three blood vessels were blocked. Since then, he still experiences pain in the area and is in and out of hospital regularly.

Mr Swee said he also has diabetes, which results in his legs being weak, and depression. He takes 14 pills a day for his medical needs.

As a result, Mr Swee, who was doing odd jobs in the 10 years on the streets, said he is unable to do physical work.

But he now hopes to find a job by April or May next year.

"I don't want to live on handouts forever, I just really need help for this current difficult period. I want to be able to support myself someday," said Mr Swee.