Getting into a kayak with a friend and paddling halfway around Pulau Ubin sounded like an adventure to some of my classmates.

But, as a non-swimmer, there was nothing that my 15-year-old self dreaded more about our five-day camp at Outward Bound Singapore (OBS) eight years ago. To this day, I remember vividly how we navigated as a team, paddling till our arms were sore, encouraging one another and making sure that no one was left behind.

It was one of many lessons in teamwork that no classroom project could have conveyed in quite the same way.

So, I cheered silently the announcement last Wednesday that all young Singaporeans will experience an OBS camp at least once in their schooling years.

About 14,000 young people take part in OBS programmes each year and this is set to triple to 45,000 by 2020, with a $250 million expansion of its campus to Coney Island in Punggol. For some schools, OBS programmes are character-building opportunities for student leaders.

At my school, all first-year Integrated Programme students - the equivalent of those in Secondary 3 - attended it.

Five days outdoors may not seem like a long time, but it was daunting to expect the unknown each day.

From leading a team of peers on land and sea trips to climbing adventure towers or jumping off the jetty, even the most outdoorsy among us came up against our personal fears and had to face them.

The idea of an outdoor training experience for young people was first suggested by former minister of defence Goh Keng Swee in 1967. He felt that newly independent Singapore needed education, leadership and character training for young people.

While initially a course to prepare young men for national service, OBS evolved to cater to students from upper secondary onwards.

Some camp instructors believe the "rugged" environment is vital to the courses; and many students who have taken the courses would agree. 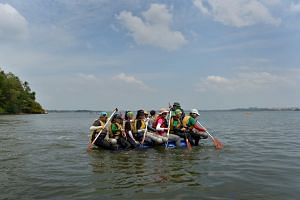 OBS a must? Many parents back it but... 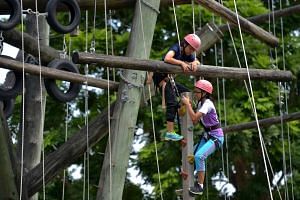 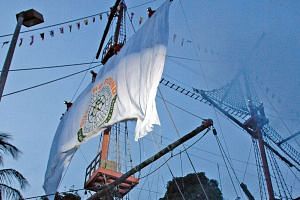 While we had the luxury of bunk beds at one campsite, we pitched tents at another. There, we had no electricity, no place to shower and learnt quickly to cook our meals - canned sardines and rice - over a campfire. OBS also provides an environment in which students see the direct consequence of their actions and have to deal with it.

For instance, something as simple as communication - or lack of it - in a group could lead to them running late and having to pitch their tents in the dark, said Mr Desmond Kao, 40, a secondary school mathematics teacher who became an OBS instructor about four years ago.

The outdoors also provide an environment in which factors such as socio-economic status are set aside, Mr Kao said.

Students learn that teamwork, rather than material possessions, is what it takes to complete tasks and "survive".

Although young people now may grow up in an environment which allows them to focus on intellectual development more than outdoor skills, Mr Kao added that such development has to be complemented with qualities such as tenacity. This keeps a person from giving up easily. "For kids to have this tenacity, they need to put themselves out there - out of their comfort zones," he said.

Failures and struggling with obstacles are common in OBS courses. OBS instructor Krishan Ashok Daryanani, 27, recounted a recent experience with a Secondary 3 boy who froze each time he tried to capsize his kayak - something that students had to learn to do to ensure they would not be trapped in a real accident.

He and the student spent an hour offshore trying before the boy managed it, and the boy grew in confidence in the following days.

"The most important thing for students is understanding that they have tried," said Mr Krishan. "Failure is the first attempt at learning."

The announcement that all young people will have a chance to take part in an OBS camp has sparked debate within the outdoor education community and among members of the public.

While many parents expressed support for compulsory outdoor learning, others argued that students should be allowed to opt out as well, with some saying that forcing them may have negative outcomes.

While that may be true, perhaps the more crucial factor is ensuring that students are allowed to push their limits without feeling forced into taking part in activities, even with compulsory OBS.

In my time on Pulau Ubin, there was room for setbacks and reflection. Failure was not met with scorn, but encouragement. I hope this space - to push limits, fail and recover from it - stays the same.

If I could have chosen not to attend the camp as a student, I would probably have done so out of apprehension.

However, if the OBS experience has taught me anything, it is to face fears head-on, or at least try.

A version of this article appeared in the print edition of The Straits Times on April 08, 2016, with the headline 'OBS taught me to face my fears'. Subscribe
Topics:
More
Whatsapp Linkedin FB Messenger Telegram Reddit WeChat Pinterest Print Purchase Article Copy permalink