SINGAPORE - Local bike-sharing firm oBike will lodge a police report over a bicycle that appeared to have been thrown into a canal at Jalan Rajah in Balestier on Tuesday (July 25).

A photo of the bike, which was seen almost fully submerged in water in the canal, was posted on citizen journalism website Stomp on Wednesday.

oBike general manager Elgin Ee said in a statement to The Straits Times that the company is in the process of lodging a report and that its maintenance team had been notified to retrieve the bike.

"We condemn this inconsiderate act and will not hesitate to take legal action against members of the public who abuse our bicycles," he added.

In May, oBike also lodged a police report over one of its bikes that was found in a canal in Punggol.

Another recent incident last month saw police nab four teenagers who were filmed throwing an oBike into a canal and riding an ofo bicycle in Punggol MRT station and near Punggol Temporary Bus Interchange.

In a Straits Times forum letter in May, oBike said it was conscious of small group of users who are still not aware of the right way to use its service.

It added that it had been engaging various stakeholders and introduced features such a credit scoring system as an incentive to promote responsible bike usage and report indiscriminately parked bicycles. 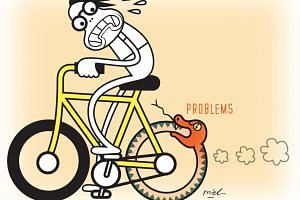 Is bike sharing worth the bumps? 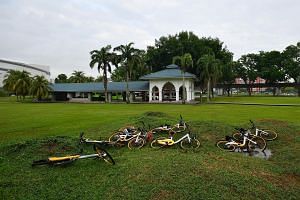 Bike-sharing companies will have to moderate growth of two-wheelers

There have been numerous cases of bike abuse since the three bike-sharing firms in Singapore - oBike, ofo and MoBike - launched their services early this year.

The highest profile ones were two instances in June when bikes were thrown down from HDB blocks in Whampoa and Boon Keng. Both the perpetrators - a 14-year-old boy and 47-year-old man - were arrested.

The latter, Selamat Mohamed Ali, was sentenced to nine weeks' jail on June 30.

The total population of shared bikes here was revealed in Parliament earlier this month to have soared to between 29,000 and 30,000.

Various MPs had raised concerns about the growing problem of illegally parked shared bikes, with Senior Minister of State for Transport Lam Pin Min saying that the Government will work with the bike-sharing firms to ensure the bicycle population is "commensurate with the availability of public parking places".

Measures to be taken include a fine should the firms receive a notice from the Land Transport Authority to remove an indiscriminately parked bicycle and fail to do so within half a day.