SINGAPORE - Bicycle-sharing firm oBike has filed a police report over the dumping of two of its bicycles into a drain, captured in a viral video.

The company confirmed with The Straits Times on Tuesday (Nov 21) that it has filed a police report. The police told ST that investigations are ongoing.

In the video that went viral on Tuesday, a man and a woman are seen wheeling a bicycle each into a drain, by a flight of stairs.

The incident is believed to have occurred on Sunday (Nov 19), between 4pm and 5pm, along Lower Delta Road.

Mr Edward Chen, co-founder and chief marketing officer of oBike, told ST that oBike is "aware of the video that is currently circulating online and can verify that the bicycles in the video belong to us".

"It is evident that the perpetrators have damaged our bikes maliciously and we strongly condemn their behaviour," he said. "Our operations teams are working closely with the police to identify those responsible."

oBike has lodged five police reports over vandalism and abuse cases since its official launch in April this year.

There was a 2 per cent decrease in the number of indiscriminately parked oBikes from September to October, Mr Chen said.

He attributed this to several factors including "better awareness through constant education and our launch of  the geofencing feature". 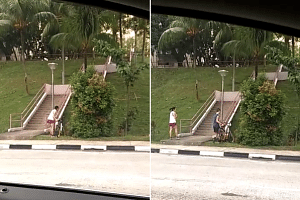 Couple caught tossing oBikes into drain turn themselves in to police

oBike also launched a cashback incentive campaign to reward those who move indiscriminately parked bikes, or bikes that are parked at obscure places.

Mr Chen added that the company was created "with the mission to provide a convenient, environmentally friendly mode of transportation in Singapore".

He called on riders to be more civic-minded for "a pleasant experience for all".