The wheels came off for oBike yesterday as the bike-sharing company unexpectedly announced that it was shuttering its operations in Singapore.

It told users, via its app, that the reason is it foresaw difficulties in meeting upcoming Land Transport Authority (LTA) licensing requirements for the bike-sharing sector.

The licensing regime, announced in March, set such standards as capping the number of bicycles offered by each firm and ensuring their users do not park indiscriminately.

oBike's surprise move comes three weeks after another operator, GBikes, said it would stop its Singapore services from July.

oBike, which began operations in Singapore in January last year, had told the media in January this year that it had about 14,000 bicycles and one million users.

Its closure left users wondering whether they would get a refund of the deposit, of up to $49, that they had to make to use its bikes.

An online petition demanding the return of the deposit has garnered more than 1,500 signatures as of last night.

When The Straits Times visited oBike's office in Commonwealth Lane yesterday afternoon, the premises appeared to have been vacated.

The company did not respond to queries on whether it would re-turn users' deposits, or if it would remove its bicycles from public spaces in Singapore. 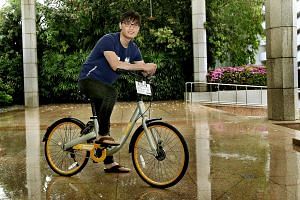 The LTA, in response to queries, said it will discuss with oBike its exit plans, including the removal of bicycles from public places.

It also advised users to ask for refunds, and seek help from the Consumers Association of Singapore if they faced difficulty in doing so.

News of oBike's departure - which followed its exit from Melbourne two weeks ago - did not seem to dampen plans by other bike-sharing firms to continue their business in Singapore.

Both Mobike and ofo reiterated that they would submit applications to the LTA ahead of the July 7 deadline.

"We are ready to fill the gap left by other operators leaving the market and will meet the growing demand for shared bike services in this country," said Mr Christopher Hilton, ofo's South-east Asian policy and communications head.

Mobike and ofo - both originating in China, where there are about 18 million shared bikes - are flush with cash. In March, ofo received an injection of US$866 million (S$1.18 billion) from investors like Alibaba.

A month later, Mobike was acquired by food delivery giant Meituan Dianping for US$2.7 billion.

Companies without such financial backing may eventually suffer the same fate as oBike, said observers.

"Smaller operators might find it tough," said Mr Francis Chu, co-founder of cycling enthusiast group LoveCyclingSG. Still, he supported the LTA regulations, saying they are necessary to rein in the misuse of shared bikes.

Dr Lee added that as companies exit the scene, this may result in a return to a government-backed bike-sharing scheme, plans for which were scrapped following the entrance of oBike and other such companies.