SINGAPORE - In the hope of promoting inter-disciplinary research in technology law, the National University of Singapore (NUS) has opened a research centre for legal issues surrounding artificial intelligence (AI), robotics and data analytics.

The new Centre for Technology, Robotics, Artificial Intelligence and the Law (Trail) will be a think tank under the Faculty of Law.

It was officially opened on Thursday (Dec 5) by Senior Minister of State for Law and Health Edwin Tong.

In a statement, the university said that the centre has already started conducting research into the regulatory questions associated with the deployment of AI, IT, data analytics and robotics in the practice of law.

It is also examining privacy and data protection issues from the perspectives of computer science and law, and plans to also probe the legal and ethical issues surrounding biotechnology.

The launch of the centre was held on the sidelines of an international academic conference on data privacy at NUS.

Speaking at the conference, Mr Tong said Trail will be able to work with partners locally and globally to produce valuable research and policies which will benefit societies in the rapid-growing digital age.

"The increasingly rapid pace of technological developments in fields like artificial intelligence, predictive analytics, Internet of Things and autonomous vehicles means the law has to respond even more quickly," he added.

In his speech, Mr Tong outlined several challenges that technological advancement has presented to Singapore, and how the Government has approached them. 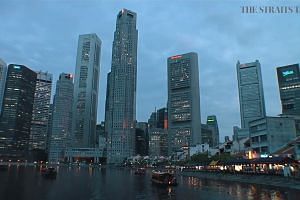 Urgent need for rules-based order in the cyber domain, which will be more contested: Ng Eng Hen

One of these challenges has been in setting regulations that balance the need to protect public interest with promoting innovation.

The Government, he said, has responded by rolling out regulatory sandboxes in areas like transportation, fintech and healthcare that allow for experimentation within controlled boundaries.

Another challenge lies in how technology has allowed bad actors to create, disseminate and profit from online falsehoods.

Mr Tong noted that fake news can culminate in violence and death, and can also cause society to be divided, which is why the Government has acted to protect Singapore.

Earlier this year, the Protection from Online Falsehoods and Manipulation Act was passed in Parliament.

It allows Cabinet ministers to act against a piece of falsehood on the Internet and order for it to be taken down, or ask for corrections to be put up alongside it.

Mr Tong said Trail has an important role to play with regard to research and thought leadership in the field of law and technology. He urged its researchers to engage the Government and the public to improve lives.

"I invite you to have conversations among yourselves, but also to have conversations with other stakeholders and also with the policymakers and the public, so that we can together create a set of laws, regulation landscape and indeed an environment that we believe we can operate in," he said.

It is led by NUS Law academic staff Associate Professor Daniel Seng, who is its director.

Steady does it as Singapore finds niche in competitive AI space

He will be assisted by two deputy directors - Prof David Tan from the university's Faculty of Law, and Prof Chang Ee-Chien from the School of Computing in NUS.

Said Prof Seng: "Never before has so many facets of technology, ranging from robotics to bioinformatics to AI, promised to affect society so profoundly.

"Trail seeks to contribute towards the conversation on how we harness and integrate technology, in a useful and equitable way, into our society and our practice of law."