In its Budget wish list, the labour movement is calling on the Government to provide an additional $500 in SkillsFuture Credit to help workers upgrade their skills.

It is also hoping for a three-year extension for the Special Employment Credit scheme (SEC), which expires this December, and two years for the Career Support Programme. The salary support schemes boost the employment prospects of older workers and professionals, managers, executives and technicians (PMETs).

Speaking on the sidelines of the Future Jobs, Skills and Training Forum yesterday, National Trades Union Congress (NTUC) assistant secretary-general Patrick Tay said some workers have used up all $500 of their SkillsFuture Credit, but want to learn a second skill.

The credit is given to all Singaporeans aged 25 and above from January 2016. A top-up now is timely, he added, because the half-life of skills is five years.

"Because of rapid changes and transformation, you can't just have one skill... (to) keep you going for the rest of your life. You probably have to reskill quite often," he said.

In a speech at the same event at One Marina Boulevard, labour chief Ng Chee Meng said NTUC will focus this year on helping workers secure better wages, welfare and work prospects.

One area it is looking at is a review of the retirement and re-employment ages. 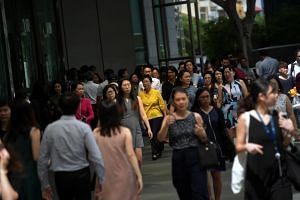 NTUC, he said, will also look at extending the progressive wage model to more sectors and lower-wage professionals, managers and executives, as well as advocate for enhanced protection for the labour rights of workers and freelancers.

Through the NTUC Training Council, workers will get help to benefit from the industry transformation maps, said Mr Ng, who is NTUC's secretary-general.

Addressing about 500 people, including union leaders and company management, he said workers must transform to prepare for change, and for Singapore to leverage opportunities.

As part of these transformation efforts, Mr Ng said the tripartite model must go beyond the traditional collaboration between the unions, Government and employers, and adopt a "systems thinking" approach, where they look at sectors as ecosystems and try to solve problems upstream.

Citing an example, he said this approach led to the setting up of the Singapore Bus Academy in 2016 to address the lack of skilled Singaporean bus captains.

Mr Ng said the global economy is expected to be slower this year, but Singapore remains in a good position because of its strong brand, geographical location in Asean and high-quality workforce.

"We have strong institutions, a strong investment environment and a strong innovation index - very good positive foundations that we can build on for the next lap of our development," he said.

The Special Employment Credit scheme subsidises the wages of Singaporean workers aged at least 55 who earn up to $4,000 a month. The scheme was extended once in 2017 and ends in December.

The Career Support Programme subsidises the wages of mid-career or long-term unemployed people hired for PMET jobs and is due to end next month.