SINGAPORE - A team of researchers at the Nanyang Technological University (NTU) have found a way to grow "mini kidneys" in the laboratory.

These miniature versions of the human kidney are around one to two millimetres wide, and are used now at NTU to test how effective some drugs can be in curing polycystic kidney disease, which causes cysts to form on a kidney.

The mini kidneys are known as kidney organoids, and are grown outside the body from the skin cells of a patient with genetic polycystic kidney disease.

Over a three-month period, the skin cells can be reprogrammed into becoming stem cells, after which they can be manipulated to grow into organoids.

Due to the tissue being obtained from patients with the disease, the organoids will develop fluid-filled cysts. At this point, drug molecules can be applied to the organoids to test their efficacy.

Two drug molecules have since been tested on diseased organoids from patients with kidney cysts, with the tests proving that the drugs could reduce the size of the cysts on the "mini kidneys".

"Our kidney organoids, grown from the cells of a patient with inherited polycystic kidney diseases, have allowed us to find out which drugs will be most effective for the specific patient" said Dr Xia Yun, principal investigator on the project and assistant professor at the NTU Lee Kong Chian School of Medicine.

"We believe that this approach can be extended to study many other types of kidney disease."

Dr Xia added that these kidney organoids will allow for medication to be tailored from patient to patient.

"Drug screening does not take into account some genetic errors that cause kidney disease," she said. "These genetic differences can influence directly how patients react to kidney disease treatment. Having these organoids allows us to test and develop personalised treatment for each patient, from their genetic material."

When grown to full size, the organoids function like human foetal kidneys in the first three to six months of development. These organoids could be used to understand the development of nephrons - the kidney's filtering units - that happens as the foetus grows.

Previous research has shown that having a higher number of nephrons at birth appears to to provide some degree of protection against conditions like hypertension and kidney failure, and decrease the incidences of these illnesses later in life. 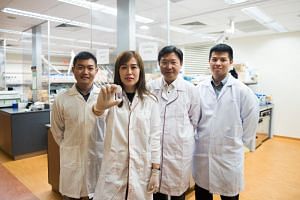 Additionally, the proof that these miniature versions of the human kidney can be made in the lab, and that these organoids still function when implanted into a mouse's circulation system, also opens up possibilities that the kidneys can one day be used to replace diseased kidneys.

"Although we are still quite far away from using these kidney organoids for replacement therapy, this study has made a small step closer to this ultimate goal," said Professor Juan Carlos Izpisua Belmonte, stem cell scientist and an international collaborator on this study.