SINGAPORE - The National Parks Board (NParks) will get to work restoring kampung houses in Pulau Ubin to their former glory.

NParks will work with community partners, including heritage experts and nature groups for the project.

Among the houses that will be restored is a disused structure built in the 1930s. House 63C - a five-minute walk from the jetty - is now hoarded up.

It was the home of one Mr Tan Bak Tee and his family for 50 years before it was returned to the authorities in the early 2000s.

Mr Tan Chee Kiang, 69, who is Mr Tan Bak Tee's nephew, said: "The house is old, dirty and the structures have broken down. There are even snakes there. It would be good to restore it and make it look nicer."

The exact number of houses that will be chosen for restoration is undecided. For now, Mr Tan's former house and four others have been selected. There are about 70 kampung houses on the island.

Second Minister for National Development Desmond Lee, speaking at the launch of the project, said it was "a first step in sustaining the unique charm of Ubin".

He said: "Moving forward, we are exploring the possibility of allowing groups and individuals to use and manage unoccupied kampung houses that have been restored, if they can demonstrate that they can work alongside the existing village community to contribute to our larger vision for a rustic and nostalgic Pulau Ubin."

Mr Lee, who is also the Second Minister for Home Affairs, was on the island to mark Ubin Day on Sunday (July 16). 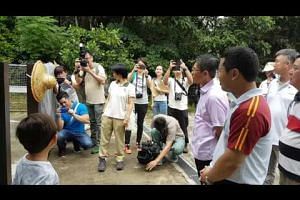 The Friends of Ubin Network has mulled over the restoration project for some time, and its members joined hands with NParks to develop proposals on which houses to restore, and how the restoration will be done, he added.

Dr Vivienne Wee, an anthropologist who does volunteer work with the Singapore Heritage Society, is among those who will help to identify the houses that are in a state of disrepair, and decide what is needed to restore them.

She said: "Many of the villagers still know how to do the repairs. That is also a disappearing body of knowledge that we need to conserve."

One possible use for the vacant houses after restoration, she said, would be to allow short stays for people who want to experience life on the rustic island.

NParks will also be starting a two-year biodiversity survey on Pulau Ubin later this year, with the help of volunteers, National University of Singapore researchers and citizen scientists from nature groups.

It will be the first biodiversity survey to be conducted spanning the entire island. The results will allow NParks to update Pulau Ubin's species inventory. It will also help plan future research, habitat enhancement and species recovery projects, and long-term monitoring and management of the island.

There are about 720 native plants species and more than 300 species of mammals, birds, reptiles and amphibians on the island, as well as about 240 species of butterflies, dragonflies and damselflies.

Mr Lee on Sunday (July 16) unveiled the revamped Nature Gallery by HSBC on the island. The gallery was upgraded with a $100,000 donation by HSBC.

The revamped exhibition features information panels, educational displays and an interactive touchscreen, including 3D models of flora and fauna found on the island such as the Asian small-clawed otter and dugong.