Work on a Gothic-style extension to the Novena Church is under way, in an effort to cater for the large crowds it attracts.

The $55.4 million revamp to the Catholic church at 300 Thomson Road will include 22 stained glass windows made by two Italian craftsmen, and a high-vaulted ceiling with limestone-clad columns and walls.

Some old columns from its existing structure were removed to connect the old space with the new one. Seating capacity will be boosted from 800 to 1,800. 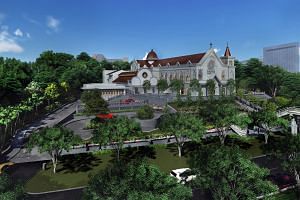 An artist's impression of the extension's interior was posted online last week and has generated excitement among the Catholic community, mainly for its ornate and traditional appearance - a rarity for modern Catholic churches here which tend to be more practical in style due to land constraints.

Father Simon Tan, the priest-in-charge of the two-year expansion project, told The Straits Times that the Redemptorist order and community selected the style so "devotees will get to experience a sense of mystical awe and reverence for God during liturgical celebrations".

The Redemptorist missionary order founded and runs Novena Church, which was built in 1950. Its official name is the Church of St Alphonsus, named after the founder of the order.

When the revamp was planned in 2009, it was expected to cost $45 million, excluding the costs for interior fittings, furniture and taxes. Fund raising was completed last month, with activities such as a gala dinner.

Prior to the upgrading effort, the church drew about 20,000 visitors across its 10 Saturday services, with hundreds spilling out into its courtyard.

The services are popular with both Catholics and non-Catholics, some of whom fly in from around the region as they believe in the intercession of Mother Mary. The Redemptorist order believes that all human beings can be redeemed.

Plans to upgrade the church stalled after the possibility of conserving it was raised by the authorities.

The green light was eventually given in 2011 after the church was gazetted by the Urban Redevelopment Authority (URA) that year.

It means the facade of the existing church, which includes a triple arc front pediment, cannot be altered. It was, however, allowed to replace its leaking roof.

The post-war church, designed by colonial architectural company Swan and Maclaren, has been described by the URA as a "local landmark and community touchstone".

When its doors open early next year, worshippers can look forward to a new heritage centre that will house artefacts, including the original 1935 chronicles of Father Aloysius John Brennan, one of the church's founding priests who travelled to Singapore from Australiafor mission work.

He and several others later started the church in 1948.

The upgraded compound will have a total gross floor area of 5,900 sq m, which includes two basement carparks with 123 spaces, and a three-storey pastoral centre fitted with a 192-seater auditorium. It will feature a plaza for gatherings and a prayer garden as well.

The church's services and weekday masses are currently being held at the Church of the Risen Christ in Toa Payoh Central, while Sunday masses are conducted at St Joseph's Institution Junior's school hall at 3 Essex Road.

Ms Grace Foo, 53, a long-time worshipper, said the upgrade is timely and needed as the church was "bursting at its seams".

The former bank worker said: "Despite that, people came in the heat and the rain. I'm looking forward to more space and a greater environment for worship."