SINGAPORE - It has always been Jay Lim's childhood dream to write or compose a National Day song and this year the 38-year-old musician will do just that.

The National Day Parade 2017 theme song, Because It's Singapore!, was jointly produced by Lim, the singer and lyricist, and veteran composer Lee Wei Song.

Inspired by the everyday lives of Singaporeans living together in harmony, the song marks the duo's first time participating in NDP.

Speaking at a media conference on Wednesday (May 17) where he performed the song publicly for the first time, Lim said one of his fondest NDP memories was listening to his favourite song Count On Me Singapore.

"It inspired me to one day write my own NDP song," he added.

When asked about his inspiration for the lyrics, Lim said he wanted to write about growing up and living in Singapore.

"There's a lot of things that make up Singapore, but what makes it unique for me is the life that we have here as a whole. That is the thing you can't compare with other places," he added. 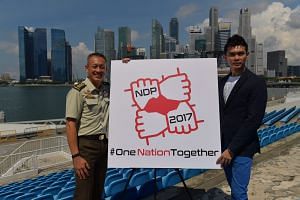 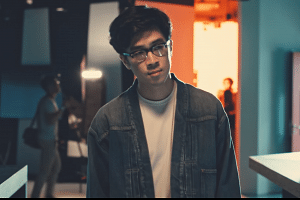 2018's NDP song: We Are Singapore and the songs before

One line in the song that touches him the most is the chorus that goes "Nothing in this world compares to our Singaporean Life", said Lim.

One of the considerations that he and Lee had in producing the song was to make the song simple enough so that everyone could sing it,  said Lim.

"The melody was composed to be simple, but I had so many feelings and things I wanted to say which I had to put into just a few words. So that was a challenge," he added.

The  NDP 2017 logo was also unveiled:  an image of four interlocking arms inspired by Singapore's first $10 Orchid-series note launched in 1967.

The symbol, emblazoned in red and white, represents Singaporeans from all walks of life coming together to build a better Singapore of tomorrow.

Colonel Melvin Ong Yoke Lam, who chairs the NDP 2017 executive committee, said; "the image of our island, nestled in the centre of the four hands, represents the special place Singapore will hold in the hearts of all Singaporeans".

He said the hashtag in the theme #OneNationTogether also resembles the logo with its four interlocking arms.

"The hashtag is a familiar feature in Singaporean home addresses, making it synonymous with the idea of home," he added.