SINGAPORE - Silk lanterns inspired by the brightly-coloured animal-shaped cellophane lanterns of yesteryear will light up the streets of Chinatown in celebration of this year's Mid-Autumn Festival.

During the month-long festivities, which begin on Saturday (Sept 23) and end on Oct 19, over 1,000 handcrafted LED lanterns will be on display along Eu Tong Sen Street, New Bridge Road and South Bridge Road. The centrepiece is 12m-tall "family tree" adorned with some 60 animal lanterns.

The lanterns are designed in collaboration with students from the Nanyang Academy of Fine Arts (NAFA) and made by craftsmen from China. The Mid-Autumn Festival, or Mooncake Festival, is celebrated on the 15th day of the eighth month of the Chinese lunar calendar, which falls on Oct 4 this year.

NAFA students Tham Xin Yi, 18, and Chua Xiang Xiang, 19, said they were thrilled to finally see the fruits of their labour on display.

Along with eight other schoolmates, they conceived the idea of using recreating the look of cellophane lanterns, and spent two months on the design for 10 animals including the familiar rabbit and dragon, to be rendered in 3-D.

"We've both been exposed to the electronic ones and the more traditional paper ones. To modernise it, we took some of the traditional animals and added some new ones like the elephant," said Ms Tham.

The Chinatown festival, organised by the Kreta Ayer-Kim Seng Citizens' Consultative Committee, will kick off on Saturday with an official opening and light-up ceremony, with performances such as aerial acrobatics and wushu displays.

The annual festive street bazaar, offering an array of mooncakes, goodies and decorative ornaments from 230 stalls along the streets of Chinatown began on Wed (Sept 20) and will run until Oct 4. 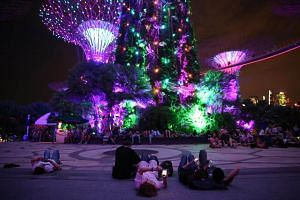 In Pictures: Gardens by the Bay light up for Mid-Autumn Festival

A new event this year is the Mid-Autumn Family Fest at Chinatown on Sept 24, where attendees can participate in traditional festival activities such as mooncake-making and lantern painting at Kreta Ayer Community Club.

Speaking to The Straits Times at a media preview of the light-up on Wednesday, Jalan Besar GRC MP Lily Neo said that she has fond memories of playing with the traditional candle-lit cellophane lanterns as a child. But as cellophane would not be able to withstand rain, the lanterns for the light-up were made with silk instead.

Lanterns for the Mid-Autumn Festival in Chinatown

Dr Neo, who has been involved in organising the festival for 16 years, said: "For this year's Mid-Autumn Festival, we hope to evoke fond memories for Singaporeans by recreating Singapore's traditional lanterns popular in the 60s to 80s, and give overseas visitors a wonderful glimpse of our traditional lanterns commonly seen in the past."

Some one million visitors throng Chinatown during the Mid-Autumn festivities annually, about a fifth of which are tourists.