SINGAPORE - A woman claiming to be the daughter of the elderly man in a dispute at Toa Payoh Lorong 8 Market & Food Centre has hit out at a young couple's treatment of her father.

Ms Caroline Ng, in a Facebook post on Tuesday (April 25) morning, said she had only just learnt about the April 21 incident after reading several online posts and watching a video of it.

"No words can express my outrage and disgust... What I find unbelievable is for the entire two days, my dad never for once mentioned a word of it," she wrote.

Ms Ng shared that when her father was asked why he chose to keep mum over it, he said "he didn't think anything will come out of it", and that he was unsure if anyone would believe him.

As it turned out, the exchange between Ms Ng's father and a young woman who had reserved a table at the hawker centre was filmed, with the video going viral and drawing widespread condemnation from netizens.

Several members of the public, outraged at how the young woman had shouted at the elderly man before her male companion shoved him in the back, also filed police reports over the incident.

Police told The Straits Times on Monday (April 24) that it was looking into the matter, and asked for anyone with information to call 1800-255-000 or submit information online at www.police.gov.sg/iwitness.

The incident also sparked a social media witch hunt, resulting in a case of mistaken identity as student Cherry Tan was wrongly fingered as the woman in the video.

Ms Tan has since filed a police report. 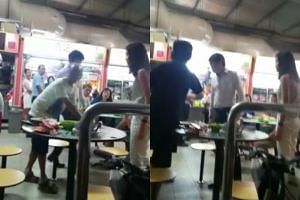 UOB was also forced to issue a clarification after some netizens claimed that the couple worked at the bank's Toa Payoh branch.

In her post, Ms Ng also touched on the problem of Singapore's

She said: "Bottom line is (doesn't matter who is there first), my dad only wanted to share the table, there were only 2 of them (the couple) and their food wasn't even ready... will it kill them just to share the seats??!"

"No matter who is in the right or wrong, nobody should be treated in this manner, let alone to an old folk," she wrote.

She added that her father at times might be a little stubborn and long-winded "like most old folks", but was adamant that it did not warrant such a display of aggression from the couple.

Ms Ng also thanked supporters for standing up for her father, urging netizens to help identify the couple and to sign a petition calling for the Ministry of Social and Family Development to take action.