The Singapore Botanic Gardens (SBG) is planned meticulously and nothing is moved or changed at random, its director Nigel Taylor told The Straits Times yesterday.

When something is altered, it is done so for a legitimate reason in a planned and deliberate fashion, he added. Dr Taylor was referring to concerns raised in a letter to ST Forum by Gardens visitor Subina Aurora Khaneja, who complained that the "grand view" of the sloping lawn at Palm Valley had vanished, while the Eco Lake has "all but disappeared", leaving swans there to walk on dry land.

Ms Khaneja also claimed that other new features at Singapore's only Unesco World Heritage Site were like "adding extra spice to an already well-cooked dish".

Responding to the ST reader's claims, Dr Taylor explained that the Eco Lake was relatively new and not heritage landscape, while the plants around it were there to encourage wildlife to inhabit the lakeside environment, which may make the lake itself appear smaller than it actually was. He also explained that the Eco Lake was part of the Gardens' "buffer zone", which was not inscribed by Unesco and therefore open to change. Some 49 of the Gardens' 82ha are covered by Unesco.

Meanwhile, he blamed the lake's low water level on the hot spell during the first two months of the year and expects the swans to return when the rain refills it.

Dr Taylor also said that Palm Valley's sloping lawn has not been removed and its plants occupy the same spots where they have been situated for decades.

For instance, the Buri Palm - or cabbage palm - has not been moved from its original position, and takes pride of place in the middle of the Palm Valley lawn, despite it partially obstructing some views of the Shaw Symphony Stage. 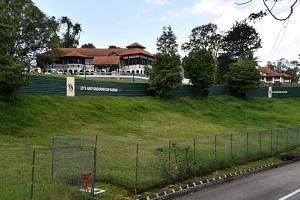 Botanic Gardens losing what made it special

Botanic Gardens' open spaces will continue to be kept

Plants are sometimes moved to make way for newer ones. For example, some younger palms at the Palm Valley have been re-organised and grouped together according to their botanical sequence.

"We are a botanical garden, which is different from your average park," said the 63-year-old, who joined the Gardens in 2011 and helped change its landscape.

"We have living collections, which are documented, labelled and often used for research. These groupings are not accidental; they are there to support research and for their educational purpose."

Dr Taylor emphasised that there was "no randomness" in the way the Gardens was managed and site management plans were in place.

Any plans to alter the Unesco-gazetted portion of the Gardens must first be vetted by a 15-member committee from government and non-government organisations. A report is then sent to Paris to inform Unesco.

Before moving to Singapore, Dr Taylor worked at London's Kew Gardens for 34 years, as curator and, later, its director. He endeavours to let the Gardens here develop in an English style in which nature takes precedence.

"The English garden has a naturalistic design, where man tries to better nature," he explained. "Instead of imposing a design on nature, nature suggests the design to the designer - and that's why the Gardens has very few straight paths, has no symmetry, and is free-flowing.

"The SBG has extraordinary biodiversity, because it has been well looked after for over 160 years. And we don't want to change that.

"We plan the maintenance of the SBG over decades, not days or weeks. We want to ensure that it's good in 10 years' time as it is now."