Many delay tying the knot to build careers and earn money, pushing up median age at first marriage

No money, no marriage. That seems to be the view of people here who have pushed marriage to the back of their minds to focus on building their careers and earning more pay.

Those who spoke to The Sunday Times said they felt they had to save up before committing to marriage because of the costs involved. These include the wedding reception, which can cost tens of thousands, and the costs of getting a home, renovation, and children.

They also said they are marrying later as they wanted to have attained some success at work to appeal to potential partners.

Mr Kiat Ng, 37, who married three years ago, said he was broke after finishing his diploma at 26. He did have an interest in settling down at that age, but his financial situation made it hard for him to think about it seriously. 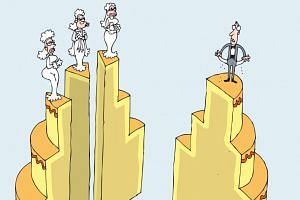 "The thought of getting married would cross my mind. I would remember that I had no money, and then I'd forget it," said Mr Ng, who did not have a girlfriend then.

He also wanted to build a career. He later found a passion in repairing pianos and became a piano technician.

After years of saving up and looking for "the right one", he married Ms Catherine Tan, 33, a product manager, and they now have a one-year-old son.

Like the Ngs, more people are marrying later, the most recent marriage statistics show.

A report by the Department of Statistics Singapore released about two weeks ago said the median age at first marriage for grooms rose from 29.8 years in 2005 to 30.3 years in 2015. For brides, it rose faster from 26.9 years to 28.2 years over the same period.

Some said they delayed marriage to save as much money as possible to keep up with the high cost of living.

Mr Hariharaan Malikaffure, a sales engineer who married at 34 in 2014, said: "When you are single, it's different. When you are married, you have to save up for your future together with your spouse."

Now 36, he had spent most of his 20s finding the right career, after a failed business.

His teenage sweetheart and now wife, Ms Shamini Thilarajah-Hariharaan, 34, was also not prepared to marry 10 years ago, when Mr Hariharaan first proposed.

"I was at the peak of my career when he asked. I wanted to study further, get my bachelor's, then my master's," said the instructional designer.

Professor Wei-Jun Jean Yeung of the Department of Sociology at the National University of Singapore said the increase in people here marrying at an older age reflects a global trend - the lengthening of the transition to adulthood. This is as young adults now take longer to finish their education and they invest heavily in their careers.

But she said this trend is more pronounced in countries like Singapore, Japan and South Korea.

On the trend of women marrying at an older age, Associate Professor of Psychology at the Singapore Management University Norman Li said: "Women are now becoming more and more educated and earning increasingly more income. So, there are increasingly fewer men who meet their standards."

With women marrying later or not marrying, birth rates here have been hit, said Prof Yeung, who is also director of the Centre for Family and Population Research at NUS.

A General Household Survey released in March this year found that the proportion of single females aged between 25 and 29 rose from 54 per cent in 2010 to 63 per cent last year.

"These high late or non-marriage rates are the main reasons why the overall fertility rates in Singapore are low, so this trend warrants serious attention," he added.

For some, like founder of restaurant chain Eighteen Chefs Benny Se Teo, 56, it was not a matter of money, but a lack of time. He spent his 20s in and out of jail because of drug addiction, then spent years building his business.

He got married in 2014 to Ms Chan Mei Kam, a higher engineering officer who is now 60.

"I have no regrets. It's the nicest thing that I feel I missed out in my younger days," he said.

A version of this article appeared in the print edition of The Sunday Times on July 24, 2016, with the headline 'No money, no getting married'. Subscribe
Topics:
More
Whatsapp Linkedin FB Messenger Telegram Reddit WeChat Pinterest Print Purchase Article Copy permalink