The National Kidney Foundation (NKF) had no choice but to sack its chief executive officer Edmund Kwok, given the seriousness of his offence against a male colleague, said the organisation's chairman.

Mr Koh Poh Tiong said he was both disappointed and extremely sad because "Edmund was a very good CEO".

"He's one of the best CEOs I've worked with," he said.

Speaking to the media last night, Mr Koh said NKF's 11-member board was unanimous in deciding that strong and swift action had to be taken because one man's personal indiscretion "cannot and must not affect the whole organisation".

From the time the incident took place, it took just eight days for NKF to investigate, seek legal advice and then fire Mr Kwok, 58. 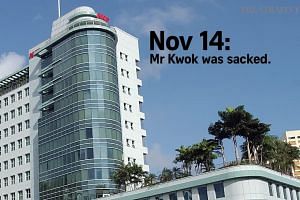 Mr Kwok's "personal indiscretion", which The Straits Times understands to be of a sexual nature, occurred on Nov 7.

The following day, the employee complained to his supervisor.

Since the department head was away, the complaint did not reach the human resource department until Wednesday. Mr Koh was told the same day.

Then came a hectic period.

"We have been working day and night. We have been having two hours of sleep," said Mr Koh, who consulted endlessly with the directors, board members and lawyers.

On Friday, he told Mr Kwok about the complaint. Mr Kwok admitted that the incident had occurred.

The organisation's lawyers advised Mr Koh that what happened was a "reportable offence".

An emergency board meeting was convened on Friday, and a decision was made to hold a disciplinary hearing in order to be fair to Mr Kwok, so he could give his side of the story.

The disciplinary hearing, conducted by a three-member panel chaired by board member William Wan, was held on Sunday afternoon. Dr Wan said Mr Kwok again admitted to the facts of the case.

On Monday, Mr Kwok's employment with NKF was formally terminated.

A police report was made on Tuesday, and a media statement was issued yesterday. This was followed in the evening by a press conference at its headquarters in Kim Keat Road, off Balestier Road.

Mr Koh said the board had all agreed that there would be "no cover-up". He said: "I am very proud of the board. We decided swiftly, unequivocally."

Added Dr Wan: "We have a duty to stakeholders, to our staff, to do the right thing. The public must know that as a board, we take our job seriously... that our integrity is not compromised, our operations are not compromised.

"The only way to do that is to act the way we did. We terminated him on the lawyers' advice on the nature of the offence."

A third board member, Associate Professor Abdul Razakjr Omar, said: "When this incident happened, I was shocked. But at the end of the day, we have to do our job."

In the three years that Mr Kwok has helmed the charitable organisation, he introduced night dialysis to help those who work in the day, started building a $12 million mega complex in Jurong that can care for 2,000 patients a week, and found jobs for patients who had become unemployed because of their need for thrice-weekly dialysis.

This is the second scandal to rock the NKF. In 2005, its then CEO T.T. Durai sued Singapore Press Holdings, which owns The Straits Times, over an article about a gold-plated tap in his office.

Revelations about Mr Durai's $600,000-a-year pay cheque and first-class perks, and his involvement in manipulating patient numbers and misusing donations shocked the public and drove donors away.

A version of this article appeared in the print edition of The Straits Times on November 17, 2016, with the headline 'NKF had no choice but to sack CEO, says chairman'. Subscribe
Topics:
More
Whatsapp Linkedin FB Messenger Telegram Reddit WeChat Pinterest Print Purchase Article Copy permalink