SINGAPORE - HolyCrit organisers will be taking their night cycling event up a notch, with races at the Sports Hub on Saturday (Feb 11).

It will be the first time anywhere a bike race is held at a stadium that is not purpose-built for cycling, co-organiser Zulkifli Awab, 40, told The Straits Times.

"Being the first in the world to do something like this is very exciting for us and for the cycling scene in Singapore. It shows that more people and venues are opening up to the idea of hosting cycling races," he said.

Some 150 male cyclists will compete in two categories - fixed-gear and road bike - on the Hub's 400m running track, which will be laid over with a rubber surface for cycling, said the Sports Hub in a media release on Monday (Feb 6). 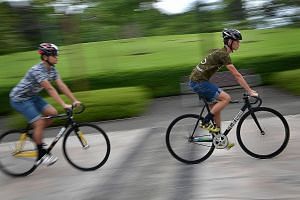 Another first - women road bikers get to fight it out for 20 spots in a new category.

About 80 per cent of the available spots have been taken up, said Mr Zulkifli.

The HolyCrit races were originally only for fixed-gear bicycles with one gear and no brakes and held in public areas.

It was halted more than two years ago after freelance project manager Zulkifli and his co-organiser, bicycle business owner Eric Khoo Shui Yan, 30, were arrested for organising the event without the relevant permits.

The duo held their comeback race, with permits, for some 90 cyclists and over 400 spectators along Jalan Benaan Kapal in December last year.

All fixed-gear participants have to pay $10 to enter the Feb 11 race, which is sanctioned by the Singapore Cycling Federation (SCF).

The race is part of a two-day multi-sport event by the Singapore Sports Hub on Saturday (11 Feb and Sunday (12 Feb), which will also feature trail running, zumba as well as rugby and ultimate frisbee tryouts.