A vertical "kampung", with flats for the elderly and facilities such as a polyclinic and a dialysis centre, will be built in the north-western part of the island.

To be completed in the second half of 2026, it will be located next to Yew Tee MRT station, said Minister for National Development Lawrence Wong yesterday.

This comes after the building of Singapore's first retirement village in Kampung Admiralty, which opened in May last year. Almost all its roughly 100 flats are occupied.

The new project is part of broader efforts to rejuvenate Choa Chu Kang and Yew Tee.

They include the building of Choa Chu Kang's first hawker centre, at its town centre, and the creation of a "Green Spine" under the Yew Tee MRT viaduct, connecting residents from Keat Hong to Limbang to Yew Tee.

This is on top of existing revamp plans: Choa Chu Kang Sports Centre is being redeveloped, while Yew Tee Park, Limbang Park and Stagmont Park will be upgraded with more family-friendly spaces.

The Yew Tee Integrated Development, which has yet to be officially named, will be developed by the Housing Board together with the People's Association, Ministry of Health and National Environment Agency.

Other details, such as the number of flats, will be made public later, said the ministry. 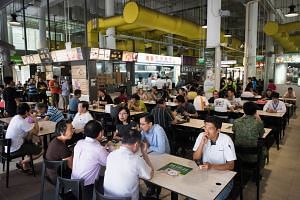 Two Choa Chu Kang hawker centres in the works, first one expected in 2026

The 11-storey Kampung Admiralty, next to Admiralty MRT station, was the first HDB project to co-locate childcare and senior centres in one development, aimed at encouraging inter-generational bonding. It also houses medical services, and a community garden.

At its launch, Prime Minister Lee Hsien Loong had said that "we will build more kampungs like this in future HDB estates".

Yew Tee resident Ang Tang Yian, 58, who works part-time in a Chinese medical hall, is looking forward to the area being livened up.

"It (the plan) is very good," said Mr Ang. He is also looking forward to the new hawker centre. "Food prices at hawker centres are generally cheaper," he added.

Experts said the model of having housing and community services under one roof is one that should be increasingly replicated in Singapore's ageing society going forward.

Ms Peh Kim Choo, chief executive officer of Tsao Foundation, a non-profit organisation focusing on ageing and eldercare, said the success of the Kampung Admiralty project sets a precedent for other projects focused on the elderly.

As the population ages, there will be "room for its replication".

The proportion of Singapore residents aged 65 years and above increased from 10.5 per cent in 2013, to 13.7 per cent in 2018, according to the Department of Statistics.

A version of this article appeared in the print edition of The Straits Times on September 23, 2019, with the headline 'New vertical 'kampung' to be built with flats for elderly'. Subscribe
Topics:
More
Whatsapp Linkedin FB Messenger Telegram Reddit WeChat Pinterest Print Purchase Article Copy permalink