SINGAPORE - The convenience store landscape is set to change with retailers making greater use of cutting-edge technology to pilot unmanned kiosks.

These include the use of palm scanners to enter stores, radio-frequency identification (RFID) to track items taken off the shelves and checked out, and artificial intelligence (AI) systems to track shoppers' movements.

Operators can also use analytics to track shopper habits and adapt product displays.

The retailers showcased their concepts, which they developed with support from government agency Enterprise Singapore, at the Singapore Retail Industry Conference and Exhibition 2019.

These innovations are part of ongoing efforts by the sector to hold its own against growing competition from online retailers and to cope with difficulties in hiring workers.

Trade and Industry Minister Chan Chun Sing, who spoke at the event, said he was encouraged by the ideas retailers had.

"They show the spirit of the sector, that even in difficult times, we are still constantly innovating and trying out new solutions," he said.

"That gives me confidence that this sector will be in good shape. If we just play defensive then even when the upturn comes, we will not be ready. When we play offensive even in tough times and constantly test out new ideas, we put ourselves in good stead." 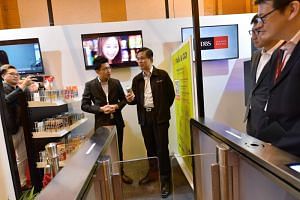 ST Scroll Back on unmanned coffee shops, no-MC sick leave, no-fare-gate stations: Can we be trusted?

Unmanned stores have been around for several years, but there are too few of them.

More recent unmanned store concepts here include a pop-up store by Singtel, launched in June, which allowed customers to buy handsets, replace SIM cards and sign up for plans.

The newest entrants hope the latest push will make a dent, and are piloting their new stores in university campuses.

OMO Store, an initiative by Umart, a minimart chain with 51 stores islandwide, will open its first store at NUS's School of Computing in September while a store by Pick & Go will open at the Singapore University of Technology and Design in October.

One highlight at the exhibition was local company Pick & Go's AI-enabled store concept which uses smart cameras and smart shelves.

Pick & Go's director Alex Ng told The Straits Times the store's AI will be able to track multiple customers even if they stand side by side and pick items from the same shelf.

"When a product is taken, the smart shelves will detect it. It will link up with the cameras and tag the item to the customer's account. Even if a customer picks up an item and puts it in their bag, the item will be charged to their account when they leave the store," he said.

He added that if the customer puts the item back on its original shelf, the item will then be removed from the customer's virtual cart.

At Octobox, customers who set up an account can scan their palms to enter the store, which uses RFID to track items. Customers can also link their DBS PayLah wallet to their palm scan and confirm payment by scanning their palms.

At the conference, organiser Singapore Retailers Association also signed an agreement with NUS and the Singapore University of Social Sciences to work together to build up the retail industry through analytics projects, joint training and workshops to develop talent in the sector, such as through internships.

Mr Chan noted that times are tough for the retail sector, and might get tougher in the months ahead due to "downside risks and the many uncertainties around the world".

"So we need to train our workers and adopt available technologies. If we can do these two things well, then we will have taken concrete actions to not only enable us to weather the current downturn but also prepare ourselves and our workers for the next upturn," he said.