SINGAPORE - Families of deceased could soon opt to scatter the ashes of their loved ones at sea without having to travel by boat.

A new burial facility will be built along the shoreline in Tanah Merah, with a boardwalk that extends into the sea to allow the scattering of ashes.

The facility is expected to be completed by the fourth quarter of next year, Lianhe Zaobao reported on Thursday (April 5).

It will have four pavilions, each of which can accommodate seven people, and a shelter for 28 people, among other features.

The facility will be open to any member of the public, regardless of race and religion.

Currently, ashes can be scattered at a designated site located about 2.8km south of Pulau Semakau. Those who choose sea burial will have to rent a boat to get to the site.

With the new facility, the National Environment Agency (NEA) hopes to make it more convenient for people to conduct their sea burial ceremonies and to protect the dignity and decorum of the proceedings.

Prior to construction, comprehensive consultancy studies and a study on the impact on the environment will have to be conducted .

Mr Ben Tay, 39, funeral director of Teck Hin Undertaker Funeral Services, said: "This facility will provide one more option for a larger ritual and will make it safer and more convenient for people with disabilities to attend the ritual." 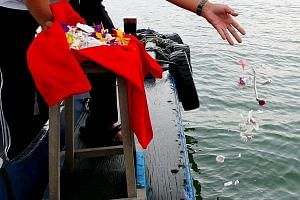 Final resting place for your loved ones' ashes: A niche... the sea... and soon, a garden? 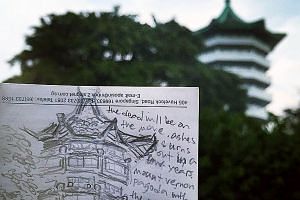 Scattering of ashes at sea can cost about $100 without any ritual, or $400 to $480 with rituals, according to undertakers whom The Straits Times spoke to.

It would cost at least $1,200 to place the ashes in a niche at a columbarium, they said.

Undertakers have seen an increase in the number of sea burial requests, with the majority coming from Buddhists and Hindus.

"In general, there is an increase in the number of people who opt for sea burial of about 20 per cent," said Mr Roland Tay, 71, funeral director of Direct Funeral Services.

This increase could be due partly to the deceased not wanting to put a burden on their family members during the annual Qing Ming Festival, and the lower cost of sea burial.

"If a place can be dedicated for sea burial, many Hindus will be able to conduct burial ceremonies for their loved ones and I think many Hindus will appreciate it a lot,"said Mr Swami Vimokshananda, 69, president of Ramakrishna Mission Singapore.

NEA is also considering the feasibility of a land-based ecological burial service as an additional option for the placement of cremated remains.

This will be confirmed by the end of this year.