SINGAPORE - Shoppers who are sick of carrying their haul around with them will soon be able to find comfort through Funan's latest technological installation - a robot controlled collection point.

Customers at any of three shops in the trial - gaming store GamePro, Alan Photo and T K Foto- can opt for the service and get a one-time password when they make purchases.

The shops will leave their items at the collection point in Basement 2.

When shoppers want to retrieve their goods later, they just enter the password at the collection point and a robotic arm will pick up the items and deposit them through a window.

The trial service is free and will start in the first quarter next year. It will operate 24 hours a day so customers can pick up their shopping at any time, even when the shops have closed.

The robot-enabled trial comes as malls seek to offer a solution to the growth of e-commerce that has threatened the relevance of physical stores.

It is not clear if the collection service will be extended to purchases made on the three shops' online sites.

Alan Photo operation manager John Chong told The Straits Times: "Currently our online store is not linked to the physical stores but once that is set up we would definitely be open to customers buying online and then collecting from the collection point."

Mr Chong added that the trial would be "very beneficial to customers who buy something but aren't going straight home or are very busy because they can come collect at anytime". 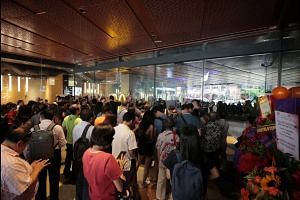 The trial was announced on Friday (Dec 27) at the official opening of Funan, which was attended by Deputy Prime Minister Heng Swee Keat.

Since it opened its doors to shoppers on June 28, large e-commerce heavyweights such as Taobao, clothing retailer Love, Bonito, and most recently, Lazada, have opened physical stores in Funan.

Alan Photo opened in 1986 at Sim Lim Square and expanded to Funan IT Mall in 2006. It is one of the stores that remained after the mall's three-year, $560 million transformation.

The once tech-centric mall now has a more chic lifestyle vibe that has left little semblance of its former self.

Average monthly foot traffic has increased by about 70 per cent since the renovation compared with 2015 levels, Capitaland and Capitaland Mall Trust said on Friday, although exact figures were not available.

The mall houses more than 200 brands - 60 per cent are homegrown - with the retail and office spaces "close to full".

CapitaLand Mall Trust chairman Teo Swee Lian said at the official opening: "It is now a vibrant integrated development. It is not just a mall but a space for discovery, learning and shopping, underpinned by a digital layer of customer experience."