The National Anthem, Majulah Singapura (meaning Onward Singapore in Malay), will be updated as part of celebrations to mark the 60th anniversary of Singapore's national symbols.

The new version is a rendition by the Singapore Symphony Orchestra, Minister for Culture, Community and Youth Grace Fu said yesterday morning.

It will be revealed tomorrow as part of a commemoration ceremony for the 60th anniversary of the anthem, the national flag and the state crest, Ms Fu said on the sidelines of the One Community Fiesta family sports carnival held at Jurong Lake Gardens.

This will be the first update to the National Anthem since the current version was recorded in 2001.

Majulah Singapura was composed in 1958 by the late Zubir Said as an official song for the City Council of Singapore.

It was based on the council's motto, "Majulah Singapura", which was translated as "May Singapore flourish" at the time.

Mr Zubir was moved by the social and political awakening of the people then and wanted to capture their mood and feelings towards the country.

After Singapore attained self-governance in 1959, then Deputy Prime Minister Toh Chin Chye expressed interest in adopting it as the National Anthem, which he felt should be in Malay, which was the region's indigenous language and would appeal to all races.

The song was adapted slightly and introduced as Singapore's National Anthem on Dec 3, 1959, at the City Hall Chamber. 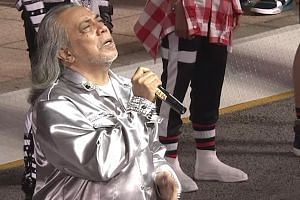 At a rally attended by 25,000 citizens at the Padang, then Prime Minister Lee Kuan Yew called for the people of Singapore to come together under the flag, anthem and state crest, and to pledge their loyalty to the new nation.

"May our new symbols endure and evoke in our hearts those sublime feelings of dedication and sacrifice to a cause bigger than our individual selves," Mr Lee had told the crowd.

Yesterday, Ms Fu said the adoption of the national symbols in 1959 was an important moment for Singapore as a young nation.

The symbols are an anchor of Singaporeans' national identity, she added.

"I think 60 years on, Singaporeans are wearing the flag proudly. They are singing the anthem proudly," she said.

"Right now, our Team Singapore athletes are wearing the flag on their sleeves, proudly representing Singapore, and if they win, they will be on the podium and the National Anthem will be played," she added, in reference to the ongoing SEA Games in Manila.

"Listening to the anthem, whether you are in Singapore or when you are overseas, brings along the emotions of being one with one another and with the country."

A spokesman for the Ministry of Culture, Community and Youth said the new recording is based on the 2001 musical arrangement, which was arranged by composer and Cultural Medallion recipient Phoon Yew Tien.

The new version of the National Anthem will be broadcast for the first time on all radio stations at 11.20am tomorrow, 60 years after the national symbols were first unveiled.

It will also be available for download on the National Heritage Board website for public use, including for schools and government agencies.

Bukit Batok East resident Lee Yuen Mei, 76, said the National Anthem brings back memories of her youth. She hopes that the new version will not be too different from the current one.

"I have been singing the National Anthem since I was in school," she said.

"It makes me feel very proud to be a Singaporean."

The National Anthem was first revealed during a historic nine-minute ceremony on Dec 3, 1959, which symbolised the full attainment of self-government by the state and the swearing-in of Mr Yusof Ishak as Singapore's first Malayan-born head of state.

The ceremony began with the British anthem, God Save The Queen, before Majulah Singapura was played.

At the end of the ceremony, both anthems were played again, but this time with Majulah Singapura first.

The practice of playing the National Anthem in schools during daily flag raising and lowering ceremonies was introduced on Aug 29, 1966, just weeks after the first National Day Parade.

In 2001, it was officially relaunched in the musical key of F-major. Local composers had been invited to submit their arrangements, and one by Cultural Medallion recipient Phoon Yew Tien was eventually chosen for its grand and inspirational qualities.