Managed by 3 govt agencies, it will encourage public-private tie-ups to help firms digitise

An estimated 10,000 new tech-related jobs are expected in the private sector over the next three years, thanks to a new government office that will encourage public-private partnerships to help companies digitise and keep up with the rapid pace of technology.

The Digital Industry Singapore (DISG) office, announced by Communications and Information Minister S. Iswaran yesterday, is the "first stop" for companies to seek help in matters related to the sector. They can work with it to secure talent and market access, build capabilities and expand overseas.

The DISG office has already begun its work, said the minister, pointing out that it supported the establishment of Grab's new headquarters here. The headquarters will house up to 3,000 employees.

Speaking at the opening of this year's Smart Nation Summit at the Sands Expo and Convention Centre at Marina Bay Sands, Mr Iswaran added: "There are several other similar projects in the DISG pipeline, which will also bring broader benefits for Singapore's digital ecosystem, including the creation of an estimated 10,000 new jobs over the next three years."

The chief digital industry officer of DISG, Mr Kiren Kumar, told The Straits Times that these jobs will be a subset of the 16,000 new jobs that will be created by next year under the Industry Transformation Map (ITM) for infocomm media.

The ITMs for 23 sectors were launched in Budget 2016 as part of a $4.5 billion industry transformation package. In response to ST queries, Mr Kiren said: "The ITM's goal is still 2020. Ours is really over the next three years so it goes beyond that, but it will be a subset of it."

The new office is managed by the Economic Development Board, Enterprise Singapore and the Infocomm Media Development Authority (IMDA), and brings together 45 existing officers from these three agencies. 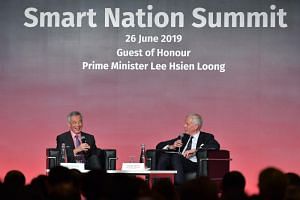 Robots to wipe out 20 million jobs around the world by 2030: Study

In a joint statement, they said the 10,000 new technology sector jobs to be created will be the result of the DISG's efforts, including the creation of new policies and guiding government investments in areas such as data, talent, trade and digital infrastructure. The agencies added: "Beyond technology roles in engineering, software and product development, DISG expects that jobs in other functions, such as finance, human resources, innovation and business development, will also be created."

DISG will also seek to build up two aspects of the technology ecosystem: consumer technology and enterprise technology.

On the consumer technology front, it will assist companies to tap the growing Asian market to capture opportunities in areas such as ride hailing, e-commerce, fintech and new media.

According to Mr Iswaran, the work of DISG will be to create public-private partnerships by pooling together resources and sharing knowledge.

Later, in a separate dialogue at the summit, Prime Minister Lee Hsien Loong cited three ingredients that Singapore needs to have to succeed in its vision to use technology to improve the quality of life for its citizens.

These are: strong engineering capabilities, more leaders and managers who understand enough about technology, and a society that embraces science and technology - not fear it, said Mr Lee.

More than 15,000 local and international guests are attending the events during the week, which include the Straits Digital Exchange, the Digital Government Exchange and Innovfest Unbound.