SINGAPORE - A new music video for Majulah Singapura has been produced to mark the anthem's 60th anniversary.

The new music video is a ground-up initiative separate from the new recording of the anthem by the Singapore Symphony Orchestra that will be broadcast on all radio stations at 11.20am on Dec 3 as part of a commemoration ceremony for the 60th anniversary of the anthem, the national flag and the state crest.

The project took two months to finish and was mostly funded by the Ministry of Culture, Community and Youth's Our Singapore Fund, which supports citizen-led, ground-up projects.

Mr Ramli's rendition of Majulah Singapura drew both praise and criticism when videos of him singing at the NDP rehearsals became public.

While some took issue with the sombre and moody tone of the tune, which is in stark contrast to the orchestral version usually played at official events, many praised the singer for putting a unique and soulful spin on the anthem.

The team behind the new video includes creative producer Benjamin Tan, 30, who was also the show producer for this year's and last year's NDPs. 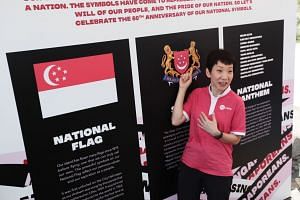 Mr Tan, who will also be the creative producer for NDP 2020, said: "While working on the NDP, I became more aware of how powerful the lyrics were and how the song is timeless and resonant.

"I felt that it was a pity if we didn't do a proper music video for this version of Majulah Singapura."

Film director Alvin Lee, 28, said the video is in black-and-white because he wanted it to be an elegant nod to the past.

Mr Tan added: "Everyone in the video is looking up but in different directions. This symbolises how we all have different ideals and different notions of progress but, at the end of the day, we are all Singaporeans."

He said that the cast members who appear with Mr Ramli in the video include "everyday people doing wonderful and extraordinary work".

Many of the talents behind the scenes were involved in past NDPs.

For the video, award-winning film-maker Royston Tan served as creative director while playwright Jean Tay was the creative consultant. Mr Royston Tan was the film and multimedia director for NDP 2019, while Ms Tay was scriptwriter for NDPs 2015, 2018 and 2019.