They include enhanced insurance and reward scheme for top performers, and vouchers for those who start families

In a new scheme, recognition for national servicemen's contributions will include a token when they start families.

Under the Celebratory Gifts initiative, NSmen will receive $100 worth of vouchers when they get married or have a child. These vouchers can be used at participating merchants including retail and food and beverage outlets.

To be implemented by the end of the year, it was announced by Senior Minister of State for Defence Ong Ye Kung at the debate on the Defence Ministry's budget yesterday.

"These forms of recognition are important to let them know their sacrifices are deeply appreciated," he noted. Still, more will be done, including the enhancement of a programme to reward those who do well during in-camp training and national service courses, Mr Ong said. Starting this month, the NS Excellence Award will be given to the top performing 30 per cent of NSmen, up from 10 per cent previously. 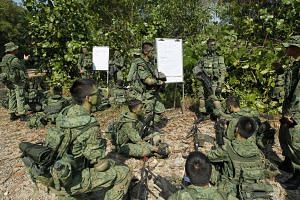 With this, each serviceman will be covered for $150,000 in group term life and in group personal accident insurance. This covers all incidents during full-time NS and operationally ready NS activities.

More will also be done to recognise employers who adopt human resource practices that support NSmen.

A national accreditation scheme, the NS Mark, will be launched this year. Under the scheme, organisations can be awarded the NS Mark or a more prestigious NS Mark (Gold).

Mr Ong also touched on the SAF's compensation framework, in reply to questions from Mr Faisal Manap (Aljunied GRC) on whether the loss of income and costs of care are adequately covered when a serviceman becomes disabled.

Mindef also pays medical expenses incurred at government and restructured hospitals or clinics for the treatment of service-related injuries, for as long as required.

Moreover, the SAF Benevolent Fund and the SAF Care Fund provide a welfare framework for servicemen and their families.