SINGAPORE - A new litter of pups has been spotted frolicking with the Bishan otter family.

At least six pups have been spotted since Sunday (Nov 26), bringing the total number of otters in the famous Bishan family to 16, veteran otter watcher Jeffery Teo told The Straits Times.

Ms Ng Soon Lee was the first to capture the new pups on camera. She posted a 4min 9sec clip on Facebook, and said in responses to questions on her post that she spotted seven new pups. One is believed to have died since.

The family expansion comes even as otter community page OtterWatch launches talks to help the public learn about the otters and their living environment, and discuss how the public has responded to the mammals.

Online, stories of the otters have drawn comments from netizens who have expressed concern at the growth in the otter population.

The first reported count of otters in Singapore was at least 50, as reported by My Paper in April last year.

The number has gone up to more than 60 now, National University of Singapore (NUS) biology lecturer N. Sivasothi, who heads OtterWatch, told The Straits Times.

However, he stressed that the growth of the otter population depends on the availability of food and competition for the food.

"Pups are lost during movement between holts, individuals are killed by traffic and entanglement, others disperse in search of new territories and mates," he said.

"Reduced prey availability due to rising population will limit litter size and growth, which is why otters, like other carnivores, defend their territories against other otter families."

Mr Sivasothi noted how the Marina Bay family has lost the battle for territory to the Bishan family, being pushed to the periphery and losing at least two pups in territorial battles. 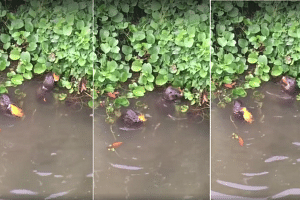 Mr Sivasothi, who has studied the mammals since 1994, pointed out that otters are frequently spotted in the Marina Bay area, where the otters can forage for fish.

The otters have caught the attention of Singaporeans and even people from beyond our shores - the BBC visited Singapore in January this year to film otters for a documentary.

In July last year, the 13th International Otter Congress was held in Singapore for the first time.

The series of meetings was organised by the IUCN/SSC Otter Specialist Group, an international group of biologists focused on otter conservation.

Mr Sivasothi said the upcoming public talks on otters will be held at National Parks Board, PA Water Venture and NUS.

The Facebook page of OtterWatch will give more details and all are welcome, he said.