Visitors to Jewel Changi Airport can enjoy a new light and sound show at the complex's indoor waterfall as well as a new song by local Mandopop star JJ Lin.

The new show at the 40m-high HSBC Rain Vortex highlights the movement of water and plays with an audience's perception of reality, Jewel said yesterday.

It is the third show at the waterfall and is set to a new song, As I Believe, composed and sung by Lin. The lyrics were penned by veteran songwriter Dick Lee and arranged by music director Goh Kheng Long.

Transit passengers with a minimum 51/2-hour layover and relevant visa approvals can also enjoy a new 21/2-hour-long walking tour to give "a taste of what Singapore has to offer".

These were among the announcements made by Jewel as it celebrated six months of operations yesterday.

The complex was officially opened by Prime Minister Lee Hsien Loong in a ceremony held beside the Rain Vortex.

Jewel said that it continues to get as many as 300,000 visitors a day.

Almost all of its 53,600 sq m of net lettable area has been leased, with 14 new stores - such as Burger & Lobster and Apple's second Singapore store - opening since April. 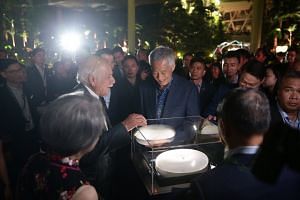 Jewel noted that 35 airlines, which serve close to 80 per cent of all departing passengers at Changi Airport, now offer early check-in at the complex.

"On average, 1,500 passengers now use the early check-in facilities daily, checking in close to 1,100 pieces of baggage," it added, noting that "two new check-in kiosks have been added this month".

Jewel chief executive Hung Jean told The Straits Times this week that the various "dimensions to the experience" can help to generate continued interest in the long run.

Beyond a variety of flagship and first-in-Singapore stores, Ms Hung said Jewel has other offerings, such as its 14,000 sq m Canopy Park, that can be packaged with retail promotions to draw more shoppers.

But while crowds continue to flock to Jewel, business has not been great for all tenants, with a few reporting significantly slower sales since the June holidays ended.

When asked about these concerns, Ms Hung said there are businesses, such as those that are first of their kind in Singapore, which continue to flourish, such as the Pokemon Centre.

"For those who think that they need help in terms of awareness and stuff, we have approached them as well ... We are open to working with them," she added. "This is our pioneer batch of tenants, and they will be forever the only pioneer batch who are doing this with us, so we really want to work closely with them for the long haul."

However, she also noted that the preference of visitors in terms of what they like to buy or eat will change over time.

Such evolving demands mean Jewel has to be on the continual lookout for opportunities to try to bring new brands in and refresh tenancies when needed, added Ms Hung.

Safety issues at the Canopy Park, where two park visitors suffered injuries in June, was another concern.

Ms Hung said: "I am happy to note that since then, the incidents have all tapered.

"I think it is also a continuous improvement process. So, where there are learning points we will try to tweak the operations from there."

She added that safety has also improved as rangers and visitors become more familiar with safe practices at the attraction.

Ultimately, Ms Hung said, Jewel represents a dream and vision come true for those involved in the project: "It has definitely changed the landscape of the aviation industry... We think by the global response, we have created something special."