SINGAPORE - A new $40 million facility in Tuas South will turn all the rubbish collected from Nanyang Technological University (NTU) into valuable resources like electricity and construction materials.

Launched on Monday (May 27) by Minister for the Environment and Water Resources Masagos Zulkifli, the facility is supported by the National Research Foundation, National Environment Agency, Economic Development Board, and NTU.

Over 11 tonnes of rubbish a day can be processed at the plant.

Waste materials are shredded, dried, and converted into gas and other useful by-products.

This process is called gasification, where organic or fossil fuel-based materials are converted into carbon monoxide, hydrogen and carbon dioxide.

As the waste is mixed with biomass charcoal, the furnace turns up the heat to 1,600 deg C. In comparison, conventional mass burn incinerators operate at around 850 deg C.

The plant may one day be used to process medical and hazardous waste as its ability to burn at high temperatures is capable of killing harmful pathogens.

These same high temperatures convert rubbish to synthetic gas, or syngas - which is mostly composed of carbon monoxide and hydrogen.

Syngas be used to produce electricity, and can be converted into liquid fuel as well.

The remaining rubbish is converted into recyclable metal alloys and slag - a glass-like material that can be used as a replacement for sand and concrete.

“This plant will eventually be able to treat various types of material like hazardous waste, sludge, medical waste. It also operates based on biomass charcoal, which is a more sustainable form of renewable energy,” said principal investigator Dr Grzegorz Lisak, Assistant Professor at the NTU School of Civil and Environmental Engineering.

“If waste water plants and recycling plants located nearby, 100 per cent of the waste in the surrounding area can be sent to this facility can be processed,” he said, adding that this plant was proof that the NTU-developed technology could work and be scalable in future. 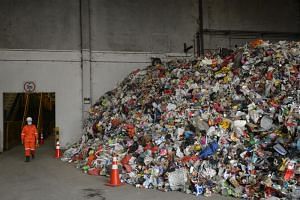 "To minimise the amount of waste headed for the incineration plants, we have gone one step further. We will recover value from ash or treated waste to optimise our remaining landfill, and keep it open as long as we can."