SINGAPORE - A new green corridor will connect Singapore's three national gardens when it is completed in the coming years, if plans to plug a gap in Singapore's green links come to fruition.

The 11km Bukit Timah-Rochor Green Corridor, which will run parallel to the Bukit Timah Canal, will give cyclists and pedestrians a continuous path between Jurong Lake Gardens, the Singapore Botanic Gardens and Gardens by the Bay.

Construction for the first phase, a 1.4km elevated linear park that will lie above the canal between Bukit Timah and Dunearn Road, will begin in 2021. There are plans for it to be extended to Kallang Riverside Park in the future.

National Development Minister Lawrence Wong announced this along with updated plans for the Rail Corridor's key Bukit Timah Railway Station community node at a community event at the station on Saturday (Aug 31).

"The land around the canal is drainage reserve. There's not a lot of land around there to build a nice green park," he said, noting that the elevated sky park is a way of optimising space in a compact city.

"Taken together, all of these new green developments will enable Singaporeans to experience and explore our little island in exciting ways. You can enjoy the rich heritage and biodiversity of the rail corridor, and then from this major spine, branch off to explore other recreational connections."

Neram and rain trees are among the species that will line the initial 1.4km of the Bukit Timah-Rochor Green Corridor.

They were selected to create a "riverine rainforest experience" and additional shade for those traversing the section above the canal, said Ms Kannagi G, director of development management at the National Parks Board (NParks).

Extending the corridor to Kallang will "provide a wonderful opportunity for people from the West to be able to access the city centre in a green setting", she added.

The first phase of the Bukit Timah-Rochor Green Corridor will connect to existing overhead bridges as well as the Rail Corridor near the Bukit Timah Railway Station node.

An orchard featuring cempedak, binjai and other fruit trees, amenities such as toilets and bicycle racks and a heritage gallery housed in the conserved railway station are among plans for the node.

The station, which has fallen into disrepair, will be restored along with the tracks, truss bridges and other rail artefacts.

The nearby staff quarters will have a heritage garden, and may house a small food and beverage establishment in the future.

Works to restore both buildings will be done in accordance with conservation guidelines, the NParks and Urban Redevelopment Authority (URA) said.

The 24km Rail Corridor, a continuous green stretch that runs from Woodlands in the north to Tanjong Pagar in the south, lies along a former railway line used for commuting and transporting goods between Singapore and the rest of the Malay peninsula.

While trail improvement and other works to enhance a central 4km stretch of the corridor began last year, the Bukit Timah Railway Station node will be the first of several planned way stations along the route to begin works. Works for the node will begin early next year. 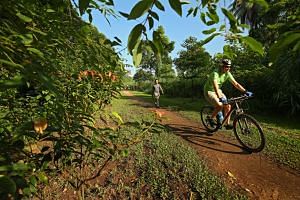 The 1930s station along the former KTM railway line has not been used since 2011, when the railway was decommissioned.

With most of the tracks and railway equipment along the Rail Corridor having been removed as part of a land swop agreement with Malaysia, the remaining tracks and steel truss bridges surrounding the former Bukit Timah station have made it a popular photo spot for visitors.

The southern half of the corridor, currently closed for pipe laying works by PUB, will be fully reopened by next year. About 4.2km of the 11km section has been reopened thus far.

The Rail Corridor is expected to be fully accessible by 2021, when trail improvement works are completed.

There have been some concerns voiced over proposed additions to the Rail Corridor, such as fencing on either side of the truss bridges to enhance safety.

Said Ms Teresa Teo Guttensohn, president of non-governmental organisation Cicada Tree Eco-Place: "Having too high of a fence may not be necessary, and it's not nice aesthetically. Our view is that there should be as few urban constructs as possible."

URA executive architect John Wan said that feedback from heritage and nature groups was taken into consideration in the finalisation of plans for the Rail Corridor's Bukit Timah Railway Station node.

“Mood lighting”, for example, will be used between 7pm and 10pm to showcase the architectural features of the station’s heritage buildings. After 10pm, the lights will dim to minimise disturbance to wildlife.

The website, railwild.org, catalogues 96 species of creatures commonly found along the corridor, such as sun skinks and white-throated kingfishers. Nature lovers can identify and learn about animals they encounter by selecting from options such as long or short bills for birds, for example, to narrow the pool.

Ms Dutta Gupta, a member of The Nature Society, noted that green corridors are crucial for wildlife conservation in Singapore.

The 18-year-old gave the thumbs up to plans for the railway waypoint, but added: "Anything that gets people more excited about nature in Singapore is a good thing. I just hope it leaves room for the wildlife too."