In October 1965, a senior officer from the Israel Defence Forces was dispatched to Singapore to meet then Defence Minister Goh Keng Swee in secret.

Newly independent Singapore, which had only two under-strength infantry battalions, an ageing wooden gunboat and no aircraft at the time, needed to build an army virtually from scratch.

Founding Prime Minister Lee Kuan Yew had given Dr Goh the go-ahead to approach Israel, after Egypt and India - both of whom Singapore sought help from to build up its defences - had not offered aid a few weeks after being asked.

During his visit to Singapore, Major-General Rehavam Ze'evi travelled incognito by taxi to familiarise himself with the country's terrain.

He then assembled a team that developed The Brown Book - a masterplan for the building up of the Singapore Armed Forces.

The plan, which Singapore accepted, assessed that the "only viable solution" was to build up a citizen army of conscripts trained and led by a small regular force.

Soon after, both countries signed a one-page agreement stating that Israel would provide defence advisers to Singapore. The first batch of Israeli military advisers were described as "Mexicans" to disguise their presence.

The details of how Israel helped to build up Singapore's military in the early years are captured in a new book launched yesterday to commemorate 50 years of diplomatic relations between the two countries.

Titled Beating The Odds Together: 50 Years of Singapore-Israel Ties, the 160-page book is jointly published by the Middle East Institute at the National University of Singapore, and World Scientific.

Among the book's contributors was Mr Peter Ho, a former top civil servant who was permanent secretary for defence from 2000 to 2004. Mr Ho gave the account of Israel's military aid during the early years.

The two countries formally established diplomatic relations in 1969. Today, the bilateral relationship goes beyond security and stretches across many areas, from trade to culture and research. 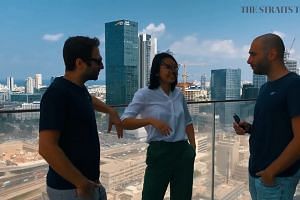 Speaking at the book launch at The Arts House, Mr Yeo said the bilateral relationship is sustained not only by common strategic interests but also by the sharing of "a certain kindred spirit" of having to survive under difficult odds.

He added: "Our bilateral relationship now extends beyond defence to many other fields, and it has always been our fervent hope that Singapore can be a benefit to Israel, to whom we owe a deep, eternal debt of gratitude."

In the book's foreword, Emeritus Senior Minister Goh Chok Tong noted that the depth of the relationship has rarely been publicised because of political sensitivities, and said the book "will fill this lacuna".

Singapore's friendship with Israel attracted some controversy in the past, Mr Goh wrote, citing how the Government's decision in 1986 to invite then Israeli President Chaim Herzog was met with anger and criticism from the Republic's immediate neighbours.

However, reactions were more muted when Israeli Prime Minister Benjamin Netanyahu made a one-day visit to Singapore in 2017, he added.

Retired diplomat Bilahari Kausikan, who is chairman of the Middle East Institute and former permanent secretary at the Ministry of Foreign Affairs, wrote in his essay that the two countries are both small, improbable outliers in their respective regions.

The book's editor, Mr Mattia Tomba, said that among the things he learnt was how Jews have lived in relative peace and harmony in Singapore since the 19th century.

An 1830 census - the first official record of Jews in Singapore - had indicated that there were "nine traders of Jewish faith" then.

Mr Tomba, a senior fellow at the Middle East Institute and founding investor of Tradeteq, added: "Rather than give a list of facts and statistics, we hope that the personal stories and ties that the contributors share will make it interesting for readers, and show the depth and width of this unlikely relationship."