A new international association to promote the development of technology and its use by legal professionals in the region was launched in Singapore yesterday.

Over 50 legal tech organisations from 15 countries such as India, China and Vietnam have joined the association, which was launched by Justice Lee Seiu Kin, the Singapore Academy of Law's legal technology cluster chair, at TechLaw.Fest, an annual conference on law and tech.

At the opening ceremony of the two-day conference at Sands Expo and Convention Centre yesterday, Law and Home Affairs Minister K. Shanmugam urged lawyers to embrace technology in their work, noting that it is critical for the legal profession to understand where technology is headed.

Citing examples of new technology, such as an application that can identify issues that need a lawyer's attention, he said technology can help lawyers in their work, as well as open up new areas of legal work.

One example is artificial intelligence (AI), which is an "emerging field where legal rules have not been worked out", he said.

"AI can help us make decisions, but what is the legal liability? Who takes responsibility when things go wrong?" he asked the audience, adding that there are various questions to consider, including product liability and how to contractually exclude or limit liability. 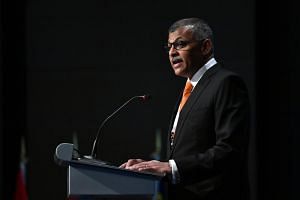 Biggest mistake is to do nothing about disruptive technology, says Chief Justice Sundaresh Menon

Law firms in Singapore to get $3.68 million boost to adopt use of technology

To benefit from the technology, ethical and legal standards that are clear, consistent and fair must be developed, Mr Shanmugam said.

Harnessing the powers of AI has to be an effort from the whole of society, he added. "The legal profession will have to be key partners in this journey. This is a constant conversation that we are going to have."

Sir Tim Berners-Lee, inventor of the Internet, in his keynote address at the conference, also highlighted the importance of developing policy and technology.

The British computer scientist invented the World Wide Web in 1989 - while working at the European Organisation for Nuclear Research, or Cern, on the French-Swiss border - as a way to exchange information with other scientists.

He is also founder of the World Wide Web Foundation, a non-profit organisation that advocates a fair and open Web for everyone.

In an hour-long address, he touched on recent issues such as the Cambridge Analytica scandal, in which private details of individuals were leaked to the British consulting firm for targeted political advertisements, as well as the scourge of "fake news".

He has, in the past, called for big technology firms to be regulated to prevent misuse of the Web by bad actors. He said in his address: "Technology and policy must always be developed together. If you develop one without the other, that's where you're going to have a lot of trouble."

A version of this article appeared in the print edition of The Straits Times on September 06, 2019, with the headline 'New body to promote tech use by legal professionals in region'. Subscribe
Topics:
More
Whatsapp Linkedin FB Messenger Telegram Reddit WeChat Pinterest Print Purchase Article Copy permalink