A new group to promote the Singapore business community's interests through the International Chamber of Commerce (ICC) has been set up, in a move expected to raise Singapore's profile as a hub for international arbitration and dispute resolution.

The group will feature a core committee that will set the agenda and drive its activities, as well as a Selection Committee of Arbitrators that will nominate arbitrators for ICC arbitration cases that are referred to ICC Singapore.

Members of the group will include Singaporean and foreign arbitration practitioners who are either based here or overseas, as well as academics and corporate counsels.

This was announced by the ICC International Court of Arbitration's president Alexis Mourre and secretary-general Alexander Fessas yesterday during the 5th ICC Asia Conference on International Arbitration.

Law and Home Affairs Minister K. Shanmugam said in his keynote speech at the one-day conference that 2019 will be "a year of inflexion" for Singapore's dispute resolution landscape, and highlighted key initiatives this year that will boost the Republic's status as a key dispute resolution hub.

This includes hosting the signing of the United Nations Convention on International Settlement Agreements Resulting from Mediation, which will be named the Singapore Convention on Mediation, on Aug 7. 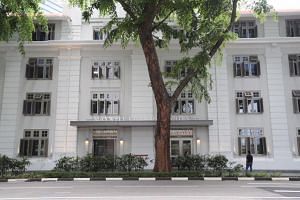 It fills a "missing piece" in the international dispute resolution enforcement framework, which currently includes the New York Convention for arbitration as well as the Hague Convention on Choice of Court Agreements, Mr Shanmugam added.

"We see it as a significant development in international commercial mediation globally. It will enhance the cross-border enforceability of mediated settlement agreements and businesses will benefit with greater certainty and assurance," he said at the conference attended by more than 200 arbitration and dispute resolution experts from 23 countries at Sofitel Singapore City Centre.

The opening of Maxwell Chambers Suites on Aug 8 will also serve to meet the growing demand for dispute resolution services in Asia, said Mr Shanmugam.

Separately, a public consultation was launched by the Ministry of Law yesterday to look at views on proposals to amend the International Arbitration Act.

The proposed amendments to the Act include the default appointment of arbitrators in multi-party situations and to allow parties, by mutual agreement, to request the arbitrator(s) to decide on jurisdiction at the preliminary award stage, among other things.

The consultation period will end on Aug 21.