SINGAPORE - A new attraction in Somerset will be developed on a vacant plot of land next to the existing skate park opposite Orchard Gateway.

The authorities are seeking proposals from developers to offer "an attraction concept with differentiated and immersive experiences" for the site, as part of plans announced in 2019 to rejuvenate Orchard Road - Singapore's prime shopping belt.

Tender documents published by the Singapore Land Authority (SLA), the Urban Redevelopment Authority (URA) and the Singapore Tourism Board (STB) said proposed uses that are a first in Asia, South-east Asia, Singapore or Orchard Road would be viewed favourably.

Examples of attractions that developers could propose for the 4,609 sq m site - about two-thirds the size of a football field - include adventure rides like the Skyline Luge Sentosa, experiential museums like the Museum of Ice Cream, as well as lifestyle or a nature park-type development.

Retail outlets that complement the proposed attraction are also allowed, as well as food and beverage options.

The authorities added that the attraction should also make use of technology and innovation to improve visitors' experience.

However, the development should not be used as an office, a nightclub, for accommodation, religious purposes or as a fitness studio or gym.

Any development should cover no more than 60 per cent of the site, with a maximum gross floor area of up to 2,000 sq m and a height of up to 20m, or about six storeys.

In 2019, STB, URA and the National Parks Board said retail concepts, attractions, entertainment and events would be introduced in each of four sub-precincts in Orchard Road - Tanglin, Orchard, Somerset and Dhoby Ghaut.

The Somerset area was envisioned as a youth and entertainment node, with lifestyle offerings catered for young people.

Ngee Ann Polytechnic senior tourism lecturer Michael Chiam said the Somerset site is in a good location, given its accessibility. He suggested that the proposed attraction should have a variety of activities that cater to different interests of young people, like adventure, lifestyle and experiential options.

"Not all attractions can be ready when the borders reopen but at least it can provide our international visitors a glimpse of what they can expect to see when they come and visit us again the next time," he said.

SLA, URA and STB said in a joint statement to The Straits Times that while they have not stipulated an opening date, tenderers should propose a development timeline in their proposal, with all approved building works to be completed within two years from the start of tenancy.

As the maximum tenure allowed is three plus three years, the tender is likely to attract concepts that do not require complex piling and structural works and thus, take less time to construct, they said. The tender is expected to be awarded in February 2022.

However, ERA head of research and consultancy Nicholas Mak felt the tender might not yield desired results, given its relatively short lease.

"A lease of six years would not be long enough for most developers to make a decent profit if they were to invest to create a real estate with a new concept for Orchard Road," said Mr Mak, noting that planning alone could take two years.

"Any developer can build the hardware, and most do. But not many can come up with a very creative and lucrative new idea for Orchard Road that has not been tried before," he added. "Those who can... would want to be fairly compensated."

Also in the pipeline for Somerset are a new hotel and event space.

In February, developer UOL Group announced its plan to redevelop Faber House, a commercial building located across the road from 313 @  somerset, into an 18-storey, 250-key hotel. Works are scheduled to start in the first half of 2022.

A URA spokesman said it is supportive of the UOL proposal to redevelop Faber House into a hotel under the Strategic Development Incentive Scheme, which encourages the redevelopment of older buildings that will transform the surrounding urban environment.

In June 2020, Lendlease Global Commercial Reit announced that it had won a tender to redevelop the open-air carpark at the junction of Grange Road and Somerset Road.

It said then that the space would be operational in the second quarter of 2022, and feature an experiential food culture and history attraction, as well as an independent cinema operated by The Projector. 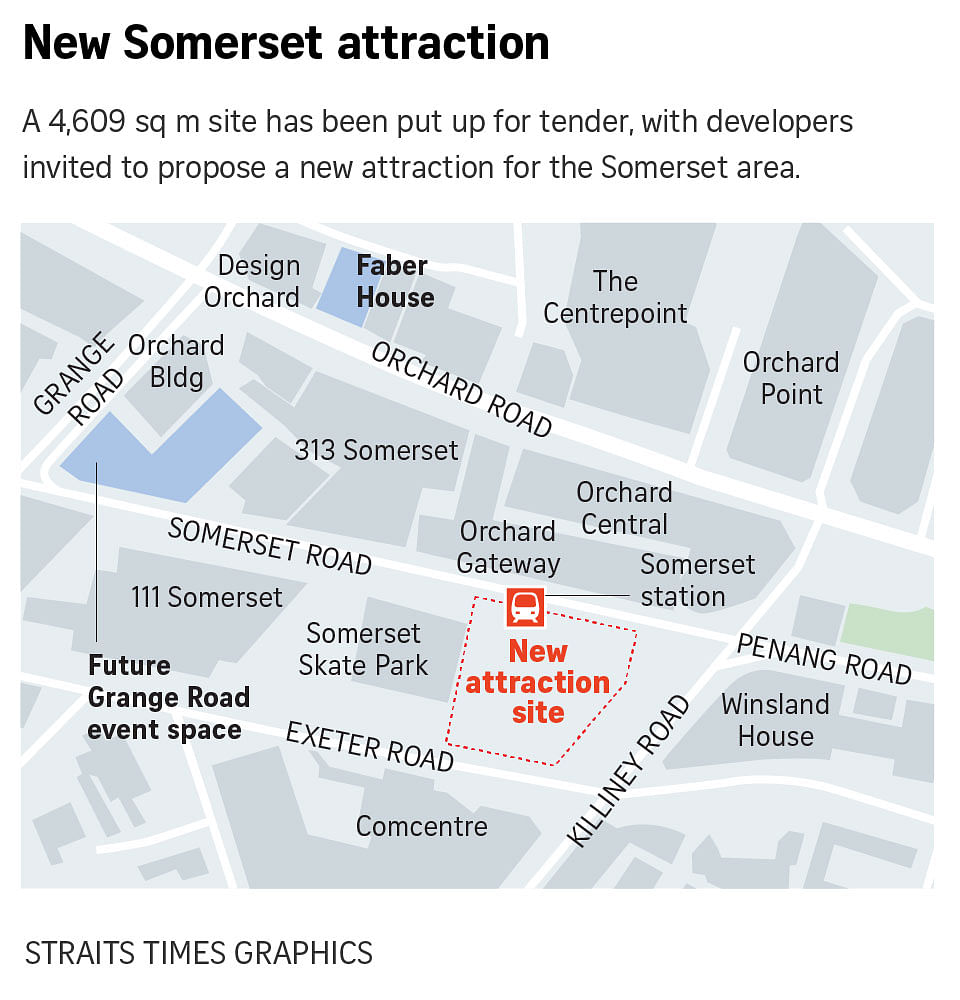 Two wildlife parks in Mandai could be further delayed due to Covid-19; River Safari to get new name